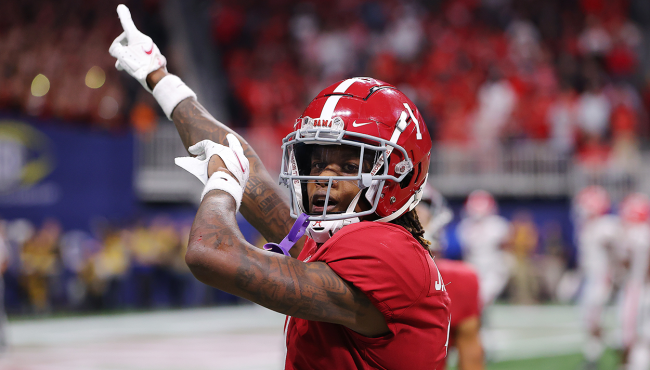 Last year’s national championship game between Alabama and Georgia was an all-timer.

The Bulldogs got their revenge on the Crimson Tide from an SEC Championship defeat, completing a come from behind effort with a 33-18 title win.

It was the program’s first natty since 1980, back in the days of Herschel Walker.

The game was one of the most watched of the 2021 season, and it capped off one of the best campaigns in Georgia history.

Unfortunately, it did the opposite for Alabama.

An annual national contender, the Crimson Tide were unable to land another championship. The game wasn’t all that was lost.

Star WR Jameson Williams went down in the first half with a knee injury. The ACL tear was a non-contact injury that effectively sidelined Williams for the remainder of the game.

A potential first round pick in the upcoming draft, it ended his collegiate career, too.

Somehow, though, the star wideout is aiming to make a complete comeback in just seven months’ time. He’s shooting to be full-go come training camp with his new organization.

On Wednesday, we learned how Williams was coming along.

Williams was on hand for Alabama’s Pro Day Wednesday afternoon, but obviously, he did not participate. He was able to give some insight into his recovery time, which is moving ahead of schedule according to the talented receiver.

.@AlabamaFTBL WR Jameson Williams tells @JamesPalmerTV he is “ahead of schedule” after his ACL injury and expects to be fully cleared physically before the start of training camp. pic.twitter.com/PT0H3ZIoel

Keep in mind that he’s just 10 weeks out of surgery. Williams is already on the field participating in some basic drills. He’s hoping to get back to running by draft time.

Former Alabama WR Jameson Williams, two months removed from surgery on his torn ACL, is not participating in Alabama’s Pro Day today. But here here he is last week, continuing to progress, with the expectation being that he’ll be running by the draft, per @Alliance_Sports. pic.twitter.com/Z4cP9J1mbR

The quick recovery has the NFL world talking about his future in the league and where he might wind up in the upcoming draft.

Where could the wide receivers end up in Round 1? I love the fit of Jameson Williams in New England. pic.twitter.com/2MW4wrrKg3

Would still love the #Jets to draft him if he continues to be ahead of schedule & knee looks good in physicals https://t.co/bh5zpoGfQA

Thinking about Jameson Williams and Elijah Moore together on the same field 😍 https://t.co/mCmX6xPk6e

Williams seems to be climbing up the draft boards. This updated timetable for a return should only help that. We’ll see if he lands in the first round next month.