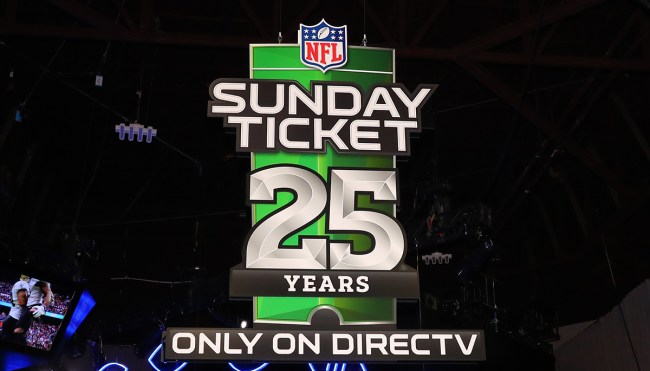 It’s been close to 30 years since Jon Taffer of Bar Rescue fame dreamed up the concept that would lead to the introduction of NFL Sunday Ticket, which was a truly revolutionary development for NFL fans who were previously out of luck if they wanted to watch an out-of-market team play on television.

When Sunday Ticket debuted in 1994, there were basically no viable alternatives for the viewers who were forced to shell out a yearly fee for access to the service (one that had risen to close to $300 per season as of last year). However, the advent of the internet and an increase in the quality of easily accessible (albeit illegal) links to games made the service (which has been exclusive to DirecTV since its inception) increasingly outdated.

In April, fans rejoiced after reports surfaced that suggested it may only be a matter of time until the satellite provider lost its monopoly to one of the streaming services that were lobbying for the rights to NFL Sunday Ticket. It took a few months, but now, Roger Goodell has confirmed that will be the case, as the commissioner implied the league is currently exploring its options as it gears up to enter a new era that’s poised to begin once the 2023 season kicks off.

NFL Commissioner Roger Goodell told CNBC that Sunday Ticket will most likely leave DirecTV and end up with a streaming service for the 2023 season. A final decision is expected in the coming months.

Now, this pivot could present some issues in a world where streaming platforms have unable to figure out how to solve the latency issues that can cause “live” broadcasts to be significantly delayed compared to those beamed into a household via cable or satellite.

With that said, if the reactions to the news are any indication, plenty of people who’ve had to deal with DirecTV in order to get their Sunday Ticket fix seem more than willing to deal with the potential downsides if it means they can finally kick the company to the curb.

I, for one, cannot wait to flip DirecTV the bird https://t.co/L4xwvZgnTz

The downfall of scumbag @DIRECTV will be beautiful https://t.co/AzB6clo2XX

Amen. I can’t get directv because my apartment faces the wrong way. What cutting edge technology https://t.co/ZkmQUhSCnu

"Sunday Ticket" Good @DIRECTV hasn’t deserved NFL SundayTicket for a while now. It’s literally one of the only reasons people use DirectTV.

We’ll likely have to wait a while before we learn which company will inevitably find itself vilified by NFL fans once it takes over; Amazon already has a deal to stream Thursday Night Football, but CNBC reports Apple and Disney have also thrown their hat into the ring.

You may also want to brace yourself for the hefty sum you’ll probably still be forced to pony up once a successor is named, but at least you can start preparing now.