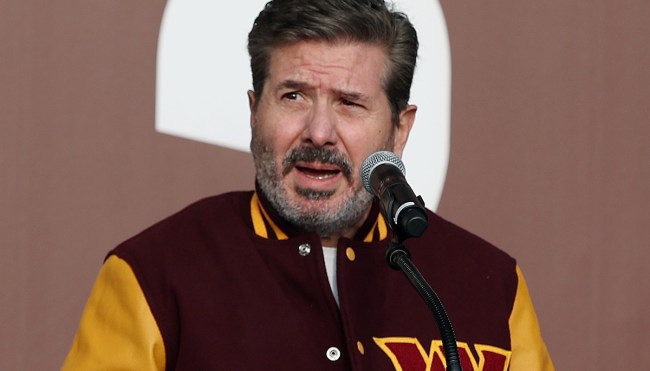 It’s been around two months since a report surfaced that suggested NFL owners were exploring the possibility of banding together to force Dan Snyder to step down as the owner of the Washington Commanders due to the lengthy series of scandals he’s found himself at the center of in recent years.

Snyder has reportedly spent weeks on his yacht in what appears to be an attempt to avoid being served a Congressional subpoena stemming from an ongoing investigation into accusations concerning the toxic workplace he’s been accused of fostering in addition to some shady accounting practices (the latter of which appeared to serve as the potential tipping point due to funds the franchise may have withheld from other NFL teams).

Any measure that would force Snyder to sell the team would require the support of 24 of his fellow owners in an official vote. The widely reviled billionaire doesn’t seem to have many allies, but one NFL insider seems to think it’s unlikely he’ll get the boot for what is essentially the same reason no country has deployed a nuclear weapon against another since World War II.

ESPN reporter John Keim recently appeared on the Inside the Huddle podcast to discuss Snyder’s ongoing woes with Sportskeeda’s Jeff Skversky. Keim appears fairly skeptical he will actually be forced to sell the team, which he implied was due to concerns about the mutually assured destruction that could occur if Snyder attempts to take other owners down with him (the segment in question begins around the 12:25 mark).

“I would say there’s probably more sentiment now than there was six months ago for maybe more owners being willing to not worry about setting a bad or setting a precedent of just voting a guy for certain things.”

I think, the fear has always been, and I definitely think there are owners that still think this way, where the fear is, well, it sets a bad precedent, if we vote him out, who’s he going to come after in court? Like, ‘What skeletons are in my closet that might be exposed, that I don’t want exposed?'”

Based on Snyder’s long and borderline impressive history of vindictive pettiness, it’s not too hard to imagine he’d do everything in his power to burn down as much as he possibly could if he ever found himself ousted.