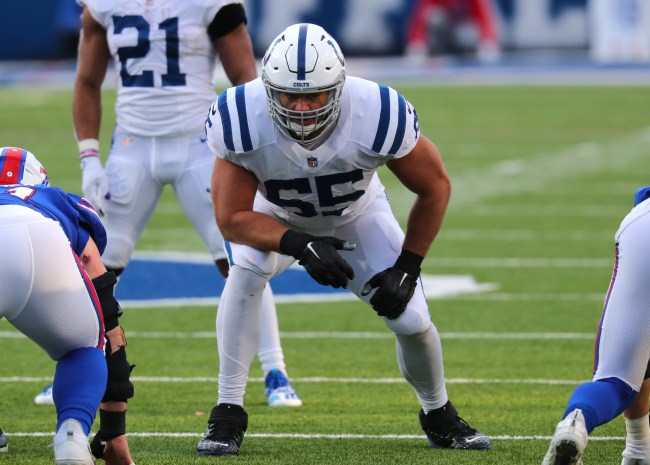 The NFL Playoffs is often a do-or-die situation for the players participating. Like, once your team loses, it’s so long, sucker, better luck next year. Of course, this NFL season has been way different than anything we’ve ever seen, so the rules have been adjusted just a little bit to make it possible for a guy to actually suit up for multiple teams. No joke.

That’s the situation that veteran offensive lineman Jared Veldheer finds himself in this week, as the 33-year-old — who has actually retired twice before and was coaching high school football as recent as late last week — could be the first player in NFL history to play for two different teams during the same postseason. Talk about a little luck and really good timing, right?

OT Jared Veldheer, who started for the Colts' on Saturday, is now signing with the Packers, per source.

Veldheer will be the first player in NFL history to play two postseason games for two playoff teams. He is allowed to sign with GB because he was on the Colts' practice squad.

New Packers' OT Jared Veldheer now will become the first player in NFL history to play for two teams in the same postseason. COVID practice-squad rules made it possible. Only this season…. https://t.co/lVxkbPXvbR

According to an ESPN article, Veldheer has the chance to make history thanks to a weird loophole the league initiated for the NFL Playoffs due to the pandemic. To better protect teams from running out of players should an outbreak or multiple positive tests occur that keep players out of games, guys on a team’s practice squad have the opportunity to become eligible to join another roster. That’s what happened with Jared Veldheer this week, as he went from being retired to playing for the Indianapolis Colts in the Wild Card Round to joining the Green Bay Packers for this weeks Divisional Round in just a matter of about 12 days.

He is allowed to sign with Green Bay because he was on the Colts’ practice squad and was elevated only for the Colts’ playoff game Saturday and not signed to the 53-man roster. In addition, he should be allowed to practice immediately because was in the Colts’ COVID-19 testing program.

Veldheer most likely would serve as the top backup tackle for the playoffs, but Wagner has been dealing with a knee injury and didn’t take part in either of the practices during last week’s bye.

This is an amazing opportunity for the veteran lineman. Not only are the Packers the top seed in the NFC — giving Jared Veldheer a legit chance at winning a Super Bowl ring after missing his chance as a member of the Colts with the loss last week — but because the high school team he spent the fall coaching just played in the state tournament last Saturday. Of course, the lineman was absent from the sidelines since he was preparing for the NFL Playoffs. Wild.

This is wild: Jared Veldheer spent the fall retired, coaching the high school team in his hometown in Michigan. That team is playing in a state tournament game Saturday at 1 p.m.

He'll be busy, starting for the Colts at left tackle in the first round of the NFL playoffs.

This is such a cool story, and just goes to show how unique and unprecedented this NFL season continues to be. It’s been a wild ride for Jared Veldheer to this point, but, hey, getting another crack at the NFL Playoffs and possibly playing in a Super Bowl has to be a really cool feeling that makes it totally worth it.