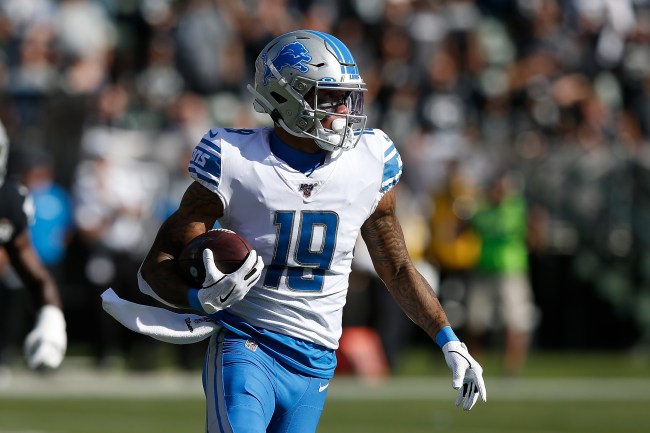 NFL refs have been pathetic all season long, as crews have missed calls and cost games because of their absolute ineptitude. In fact, things have been so bad for the zebras that, following a game against the Packers-Lions, former NFL player Desmond Howard was convinced that refs were being paid off by somebody to favor the Lions. Yikes.

Such is the life of a referee, who is expected to be perfect; even though nobody achieves perfection in everything they do. And, while missed calls are a part of every single sport that a human being is officiating, not all bad calls are created equal — and, once again, the Detroit Lions were the beneficiary of NFL refs completely F’ing up a play.

The call in question came during the Lions-Bears game the other day, when Detroit wide receiver Kenny Golladay was seen spotting the ball himself after being tackled to the ground at the 32-yard-line, but dropping the ball at the 35-yard-line. Slick move by the wideout, right? After all, every player will try their best to get a little extra feet in a game of inches like football, where every yard matters. But here’s the thing: Although Golladay positioned the ball himself, NFL refs didn’t adjust the spot of the ball, just allowing the player to determine the yardage line.

Since everything is captured on video these days — and then, subsequently, tossed onto social media for everyone to criticize — the Kenny Golladay play was as well. Take a look at the play in real time below.

Looks like the refs allowed Kenny Golladay to spot the ball on his own. He took advantage, adding a yard or two.

Genius move but sad that this actually happened in an NFL game.

And, obviously, once people on Twitter saw this, they had to voice their opinions, because they couldn’t believe what had just happened.

Oh my God. The NFL has 10 Elmer Fudd’s officiating each game.

Look, NFL refs are going to make mistakes — it’s part of the job that nobody enjoys, but is inevitable. And while fans and players can be upset over wussy calls on the quarterback, pass interference calls or missed holding penalties, when a play as obvious as Kenny Golladay’s happens, that’s when it’s time for people to get fired, because, damn, that’s unacceptable. Imagine that happening in a gam that decided a conference championship or, worse, the Super Bowl.