Baker Mayfield’s Still Mad At NFL Refs, And Says Their Bad Calls Are Affecting How He Does His Job 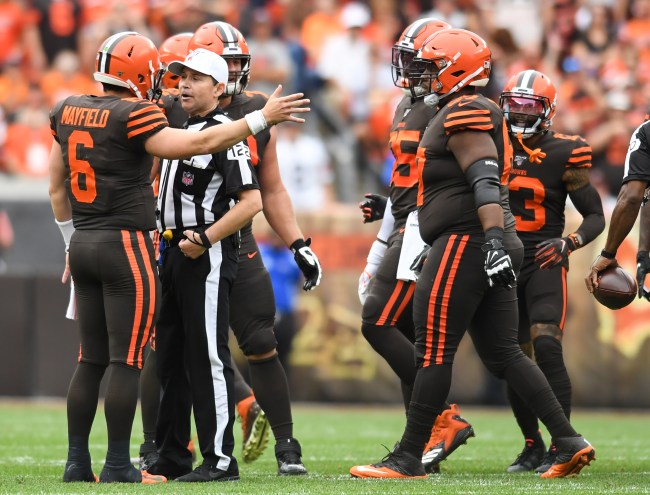 Baker Mayfield and his Cleveland Browns haven’t exactly had the season they (nor anyone else) was expecting. After becoming the darlings of the offseason by acquiring big-name talent like Odell Beckham Jr., the offense has looked miserable, the defense can’t seem to stop opposing running attacks and, generally speaking, there have been some tense moments and developing drama so far in this 2-4 campaign.

With the Browns set to take on the New England Patriots this weekend following a much-needed bye week last weekend, those in the Dawg Pound are worried that the season may already be over. Slipping to 2-5 may be too much of a hole to climb out out; even with a soft second half schedule. That said, if there’s one person who’s going to motivate his troops, it’s Bake Mayfield.

Unfortunately, Mayfield and his Brownies haven’t had much luck from the folks in the zebra outfits this season, as NFL refs have, seemingly, been against Cleveland all season long. There have been missed calls, bad calls and, overall, things that impacted the outcome of contests. And, after the Browns’ most recent loss in Week 6 against the Seattle Seahawks, Mayfield had had enough, voicing his displeasure — which ended up costing him $12,500. Here’s a quick recap of what he said.

While Baker Mayfield’s appealing the fine, he’s still unhappy with the lack of control NFL refs have shown during Browns games this season. And, speaking to reporters the other day, Mayfield didn’t take his foot off the gas pedal when it came to criticizing the black and white striped shirts, as he lamented even more, showing no regret for what he previously said.

“Well, one, I wouldn’t say it’s complaining when it’s blatantly obvious,” Mayfield said, via Mary Kay Cabot of cleveland.com. “I’d say that’s just stating facts. Freedom of speech I thought, but that’s OK, I get fined for it. It’s the league, that’s what they do. They fine you for some ridiculous things. That’s just how it is. There’s a reason that everybody is talking about it. It’s not just me.

“It needs to be said. People need to be held accountable for their job. When it affects my job, it sucks because it’s not in my control.”

Say what you want to about Baker Mayfield, but his gripes are warranted, as NFL refs have been pretty awful all season long to this point. Unfortunately, as the Browns quarterback stated, the ineptitude by the officials impacts the way players on the field play, which impacts outcomes of games — which isn’t what the league ever wants. Sadly, there might not be anything more teams can do except complain and hope for better officiating, because, right now, it’s pretty awful.