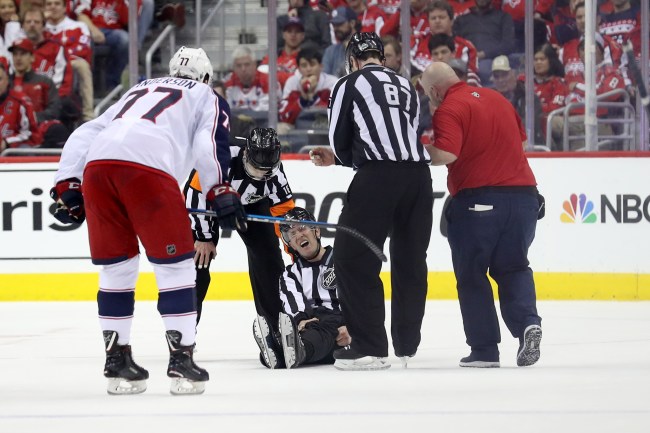 For those of you who tuned in to Game 2 of the Washington Capitals and Columbus Blue Jackets on Sunday, you probably had to stifle your laughter after watching linesman Steve Barton awkwardly fall to the ice after nicking the skate of Columbus forward Josh Anderson. When he began writhing in pain, it was apparent that the fall was far more serious that a woopsie.

We’ve got a linesman down in Washington pic.twitter.com/p4NZDDJ7LM

A stretcher was brought onto the ice but Barton opted to be carried to the locker room by team trainers, and today we learned of just how serious the injury is. According to USA Today, Barton will undergo surgery after suffering a dislocated knee cap and torn quadriceps from the fall.

Steven Walkom, NHL’s director of officiating, had this to say about the injury:

“Steve suffered a dislocated knee cap and a torn quadriceps which will require surgery. Fortunately, doctors told him this is the type of injury that you recover back to 100 percent.”

I’m no doctor, but I can’t tell which injury would be more painful: a dislocated knee cap or a torn quad.

Barton has had a difficult season injury-wise. He had to be stretchered off the ice in March when Edmonton Oilers player Connor McDavid lost his balance and barreled over Barton, who hit his head on the ice.

Luck isn’t on the side of men named Steve Barton. Any Chicagoan can tell you that.