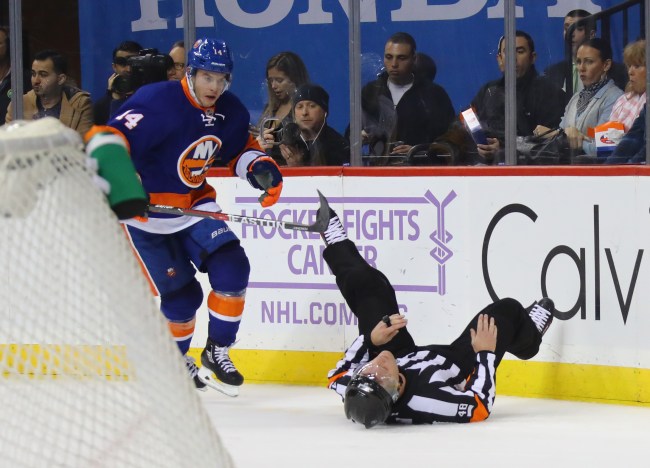 Being a full-time NHL referee is one of the most physically exhausting professions I can think of. NHL referee Garrett Rank ref’d 76 games this season, skating non-stop along the way. An NHL ref is burning around 1,000 calories per game and as a profession it requires someone who is a pure athlete, and that’s exactly what 31-year-old Garrett Rank has proven himself to be.

After completing a full season as an NHL ref, Garrett Rank tied for first place at the regional qualifier held at Anley Golf Club in Roswell, Georgia. By shooting back-to-back 71’s to finish at 2-under par, Garrett qualified for the 2018 U.S. Open. While shooting back-to-back rounds under par he had fellow NHL referee Daniel O’Rourke caddying for him.

Just off the phone with Garrett Rank. After doing 73 games as a ref in the @NHL this year he tells me: "Was next to the best players in the world on the ice… next week I get to play with the best golfers in the world. It's a pretty cool life I'm living right now"

Garrett Rank’s path to the U.S. Open hasn’t been an easy one. Garrett played hockey and golf for the University of Waterloo on scholarship (for the latter, he was a walk-on for hockey). According to SBNation, he had ‘bigger plans for golf’ but put those plans aside after a battle with testicular cancer in 2011.

In 2015, Rank represented Canada at the Pan American Games in Toronto and in 2016 he competed in the 2016 Canadian Open where he finished in 77th place. He’s also played in 15 USGA championships, so he’s no stranger to playing golf at the top level. The U.S. Open kicks off next week on Thursday, June 14 at Shinnecock Hills in Southampton, Long Island, New York.