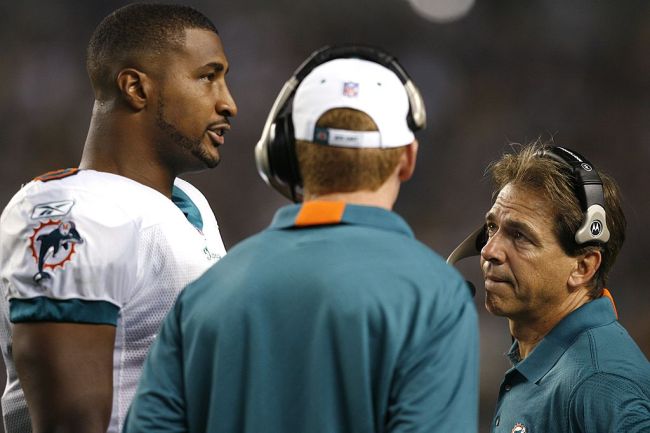 Nick Saban’s two-year stint in the NFL as the head coach of the Miami Dolphins is without question the forgotten part of his career. Given the fact that he’s the greatest coach in the history of college football, you can’t really blame anybody for sort of blocking out the two seasons he spent in the league.

After five very successful seasons at LSU that included a national championship in 2003, he made the jump to the NFL in 2005. He led the Dolphins to a 9-7 record in his first season before bolting for Tuscaloosa and accepting the Alabama head coaching job following the 2006 campaign.

Saban got a bit of a bad wrap for leaving Miami for Tuscaloosa as he kept his interest in the job under wraps, but it turns out that he may have had a good reason to leave so abruptly. According to Jay Glazer, Daunte Culpepper and Zach Thomas both physically wanted to fight Saban during his time in Miami.

“Nick Saban, why he didn’t make it in the NFL, Daunte Culpepper tried to fight him one day and a security guard stepped in,” Glazer explained on ‘The Herd’ on Wednesday. “I think the final straw was they questioned Zach Thomas’ toughness and Zach almost kicked his butt. That just doesn’t work on this level.”

.⁦@JayGlazer⁩ tells ⁦@ColinCowherd⁩ that Daunte Culpepper and Zach Thomas almost beat up Nick Saban during their time with the Dolphins pic.twitter.com/BnMzafJ8bb

Saban’s stint in Miami wasn’t his first stop in the NFL. He had spent seasons with the Oilers and Browns as an assistant, so he knew what did and didn’t fly when coaching NFL players, which makes this story even that much more interesting.

The reason for the topic about Saban coaching (and almost fighting) in the NFL came up while Glazer was giving his thoughts about Urban Meyer taking over as the Jaguars’ head coach. It’s probably safe to say that Meyer won’t be trying to get his players so fired up they want to fight him, but we’ll see.