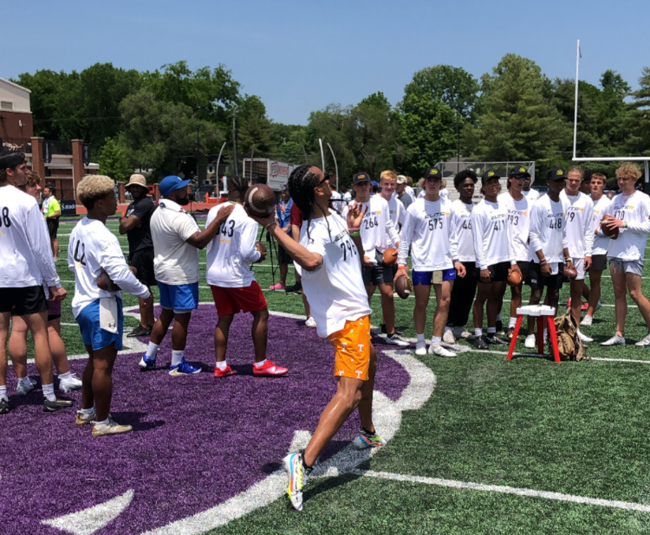 As Tennessee football tries to turn the chapter on mediocrity and return to national relevance, a large part of its future is set to enroll next year. Nico Iamaleava, a five-star quarterback in the recruiting Class of 2023 who is also the nation’s top volleyball recruit, committed to play for the Vols earlier this year.

The 6-foot-5, 195-pound California-native’s recruitment came with a lot of pomp and circumstance. Not long after taking some fresh visit photos with a G-Wagon, a five-star recruit in the Class of 2023 signed an NIL deal worth up to $8 million. Not long after that, Iamaleava committed to Tennessee.

Thus, although nothing is confirmed, Iamaleava is widely believed to be the $8 million man. Showing up to throw at the Elite 11 in Prada sunglasses only furthered that narrative.

Whether Iamaleava was the one who signed the deal or not, there is a lot of buzz around his potential. And it’s not hard to see why.

Nico Iamaleava and his 7-on-7 team competed at Overtime’s new OT7 competition over the weekend and he put on a show.

To kick things off, Iamaleava had a fantastic Friday while rocking some Sesame Street pajama pants.

Early on Saturday evening, the future Volunteer signal-caller dropped a deep ball where only his receiver could go get it for six.

He then threw a touchdown on a rope that was so fast that the receiver could barely hang on. It was a perfect ball to the back of the end zone and one of the best throws that you will ever see from a high schooler.

Nico Iammalaeva letting it rip here at @overtime’s OT7 event. Ball had so much pace the WR basically had to slow it down before catching it. https://t.co/wQySWoZIiO pic.twitter.com/dkE12XM0Bb

A few minutes later, Iamaleava showed off his skills in the pocket. He danced and ducked around a crashing defense and delivered another dart.

From start to finish, Iamaleava put on a clinic and his team won 25-6. He was perfect on the night and made it very clear that he lives up to the hype.