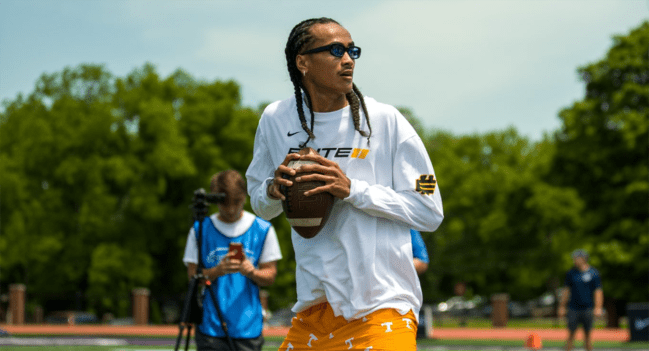 Nico Iamaleava is on his way to the Elite 11 Finals. The nation’s No. 1 overall college football recruit in the Class of 2023 flew into Tennessee over the weekend, competed in the Nashville Regional at Lipscomb Academy, and earned his invite.

No matter how Iamaleava threw, he was likely going to get an invitation to compete. Nevertheless, he showed up in style at Music City.

Iamaleava flew in with his brother Madden (class of 2025) and his father. They pulled up in a black car and from the second that they arrived, all eyes were on them.

Earlier this year, Iamaleava visited the University of Tennessee and took some extremely hard photos with a G-Wagon. Not long thereafter, an unnamed recruit signed a deal for his Name, Image and Likeness worth $8 million. Based on logical deduction, the recruit was likely one of three quarterbacks, and not long after the ink dried, Iamaleava committed to play for the Volunteers.

The $8 million NIL signee is still unknown, but the timing of Iamaleava’s commitment is certainly intriguing.

Upon arrival at the Elite 11 on Sunday, Nico Iamaleava wore Tennessee orange shorts and a pair of Prada sunglasses. Once the day began, Iamaleava made his way through the gauntlet of various passing drills. He definitely showed moments of greatness.

At times, however, he was a little bit high to his target and not as sharp.

Nico Iamaleava (Tenn ’23) had his moments but looked best when running around and making throws. Not as sharp with straight drop backs. Laser beams tho pic.twitter.com/RbNQ84onzQ

As a result, when he got to the station run by former Michigan quarterback Devin Gardner, he didn’t get off easy. Gardner put extra emphasis on Iamaleava and gave him a hard time about his glasses.

At one point, after a bad throw, Gardner took Iamaleava’s glasses and put them on his own head and made the top-ranked recruit run the drill again. Iamaleava threw a dart. In turn, Gardner refused to give the glasses back, joking that they were his now, and said “you insist on wearing these glasses, but you’re so much better without them!”

He gave Iamaleava the glasses back after the next rep, but the high school quarterback wasn’t as accurate. Gardner, again, took them back and made him run the drill back— which he did to perfection.

Watch here as Iamaleava has them on in the first rep, and then Gardner takes them for the second.

Devin Gardner putting @nico_iamaleava8 through the ringer with the rollouts pic.twitter.com/mnRH6RwWHR

Whether he had the glasses on or not, the Tennessee commit did enough to get his invite to the finals.

Will he show up to the finals with the glasses, or will he listen to Gardner and just go out and ball?