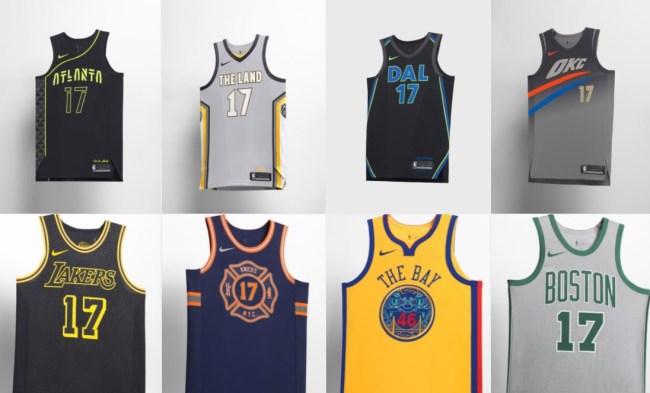 The NBA is celebrating elements of the league’s 30 franchises with their new “City” edition jerseys. These latest and last edition jerseys each team’s hood as well as the franchise’s history. “With City Edition, we felt like this could be really compelling to make a true connection of, still the organization, but the organization in reflection to their city and their community,” Elesban Montoya, senior graphic designer at Nike told USA Today. “What does it mean to be a Chicago Bulls fan? What does it mean to be a part of Chicago?” Nike’s new NBA City Edition jerseys were made with each franchise’s history and the city’s pride in mind to make a uniform with the “fabric of each city.”

The designers at Nike worked directly with the league and all 30 NBA teams to present the individuality of each team and city. “What we want to drive is authenticity,” Montoya said. “It’s going to be really important to us. So whatever’s the social status, the conversation that’s going on behind the cities at the moment, we want to make sure that we honor that.” The City uniforms will be worn throughout the remainder of this season. Previous special NBA uniforms from Nike included Association Edition, Icon Edition, and the Statement Edition. Let’s hope that none of these new jerseys fall apart during a game. You can see all of the jerseys and the explanations behind their designs HERE.

Nike just officially unveiled its "City" Edition uniforms for all 30 NBA teams. Here they are, starting with Atlanta, Boston, Brooklyn and Charlotte: pic.twitter.com/nJnztlisuC

.@kobebryant put his own special touch on the Lakers' "City" jersey and I'm here for it pic.twitter.com/exKWfN90BS

Introducing the City Edition jersey, inspired by our hometown. The #Bulls will wear these for the first time at home against the Lakers on January 26. pic.twitter.com/2QGKdGGkdM

Only in Dallas will you feel the energy the downtown skyline brings to its Dallasites. Marked by the neon glow on the letters, numbers and piping, the new Mavs City Edition Jersey reflects the swagger of the Big D and the vibrancy of Dallas nights.#NIKExNBA #MFFL pic.twitter.com/aNNxUeJD8c

The Wizards might have the best “City” edition jerseys pic.twitter.com/leo6DopsZr

this…. this is just a Thunder jersey pic.twitter.com/aEwHUiw5JP

The Kings “City” jersey is cold too. Love the Magic, Pacers and Bucks as well. pic.twitter.com/MXbiLqmVkK

Sorry…not feeling the #Spurs City Edition Jersey. Military, though important and deserves respect, isn’t the true representation of the city. Should be Fiesta colors, something that reps the Hispanic culture. Just keeping it a buck, team and Nike got it wrong. 💯🤷🏿‍♂️ pic.twitter.com/zYeCXG62Cj

The Miami Heat City jerseys looks like it was stolen from GTA Vice City.

The Miami Heat went full Miami Vice with their new jersey and it’s honestly a work of art pic.twitter.com/u1xF0IxzKZ

Did the Memphis Grizzlies jersey designer even try?

memphis should call a do-over pic.twitter.com/qOzDG5tW4T