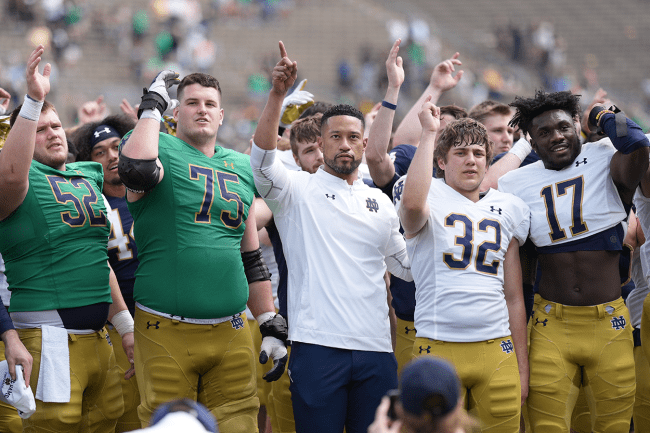 If there is one thing that you shouldn’t do as a college football program, it is give ammunition to the internet to troll you after losses. Notre Dame did exactly that.

The Irish, which got fall camp underway in Marcus Freeman’s first year as head coach on Friday, made a big mistake by joining in on the latest viral TikTok trend. It does not bode well for them.

The trend is simple. As the ‘Fortnite Move, Do It Again’ audio plays in the background, participants wiggle back and forth while swinging their arms.

Halfway through, the first dancing participant takes the phone from the other, flips the camera and films the other doing the dance. It’s a trend that has taken over the feeds of TikTok users everywhere. Brian Kelly and his daughter even joined in on the action earlier this month.

Notre Dame football is the most recent to hop on the trend. And it is rather cringey.

It wouldn’t be so bad if the first player wearing No. 2 hadn’t hit an extreme duck face. It is really the icing on the proverbial cake.

Now, posting on TikTok and joining viral trends is fine. If that’s what a team wants to do, so be it.

But said team, in this case the Irish, need to be prepared for the backlash. This video will now live online forever, whether they like it or not.

And it’s going to be used, a lot. Every single time that Notre Dame loses a game, the video will be posted — a lot — and the trolling might begin as soon as Week 1 when Freeman and his team travels to Columbus and takes on Ohio State.

Whoever let the players post this should have looked at very recent history and advised otherwise. TCU, Texas and Florida State players all posted TikToks recently and the backlash led some of them to delete the original video after the internet started with the jokes.

Notre Dame should have known better.