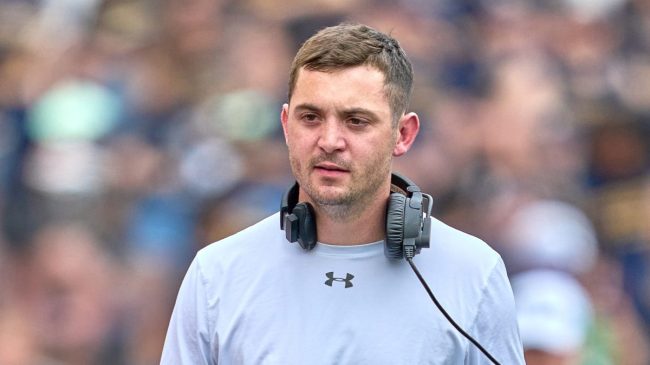 All is not well for the Notre Dame Fighting Irish.

After a strong start to the season despite a week one loss to Ohio State, things have taken a turn for the worse in South Bend.

Notre Dame suffered a humiliating loss to visiting Marshall in week two. That embarrassment is doubled when you consider that the Irish paid the Thundering Herd a hefty sum for the visit.

Things got even worse for the Golden Domers when news broke that starting quarterback Tyler Buchner would miss the rest of the season due to injury.

But the Irish had a plan. Head coach Marcus Freeman turned to divine intervention in order to find an answer and brought back one of the program’s all-time great players to address the team before Saturday’s game against Cal.

Unfortunately, it doesn’t appear that fixed things for Notre Dame.

The Fighting Irish averaged just 15.5 points per game in their two losses to begin the season. With Buchner out, sophomore Drew Pyne was tasked with turning things around against the Golden Bears.

The early returns weren’t great. Notre Dame went three-and-out on each of its first four possessions before a fumble by Pyne on the fifth.

Offensive coordinator Tommy Rees then had some choice words for Pyne on the sidelines.

Lip reading: "Do your (bleeping) job. The whole (bleeping) team is counting on you." @insideNDsports https://t.co/hgdeEvhblU

Rees appeared to tell Pyne to “do your fu*king job. The whole fu*king team is counting on you.”

Whatever was actually said, it worked. Pyne led the Irish on a 10-play, 60-yard touchdown drive the next time out, capped by a 21-yard passing touchdown to running back Chris Tyree.

Maybe all Notre Dame needed this entire time was a fire under its behind. Though we’re not sure how exactly Rees’ fiery language will go over with the Catholic church.