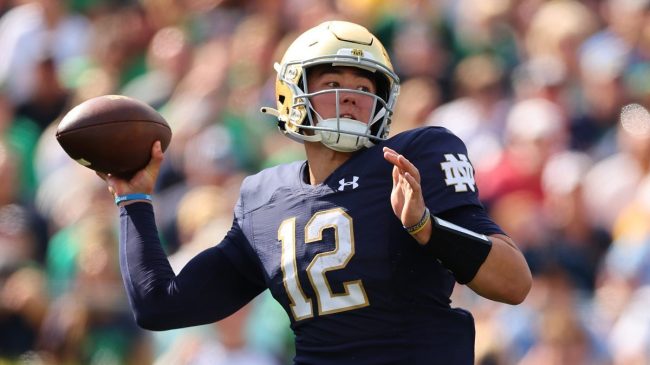 The Notre Dame Fighting Irish and first-year head coach Marcus Freeman have had a no-good, very bad start to the 2022 college football season.

That hype continued after a strong start in week one against third-ranked Ohio State. Notre Dame entered that contest as a 17-point underdog. But the Irish took a 10-7 lead into the half before eventually falling 21-10.

Despite the loss, Notre Dame earned a lot of national respect due to its performance.

But things went haywire in week two. The Irish generated absolutely nothing on offense and turned the ball over three times in an embarrassing 26-21 home loss to Marshall.

Just when it seemed like things couldn’t possibly get worse for Notre Dame, things got worse.

Buchner struggled for much of the first two games, but it was clear Freeman and offensive coordinator Tommy Rees saw the sophomore as the future.

Notre Dame head coach Marcus Freeman says QB Tyler Buchner is likely out for the year: "He ended up getting I think a Grade 5 out of 6 AC sprain in his non-throwing shoulder."

Buchner will have surgery tomorrow and the expected recovery time is 4 months.

Buchner suffered a severe AC sprain in his non-throwing shoulder late in the loss to Marshall. That means that Pyne, a redshirt sophomore, will take over as the starter going forward.

Notre Dame fans were less than enthused by the news.

I hate this for him and for us. Ugh. https://t.co/JDWpRnmFqM

Pyne made a pair of appearances for the Irish in 2021. The Connecticut native went 15-of-30 for 224 yards, two touchdowns and no interceptions.

Notre Dame now looks forward to its week three matchup with Cal with Pyne as the starter. The Fighting Irish opened the week as 10-point favorites over the Golden Bears. But that line has already moved to 9.5 since news of Buchner’s injury.