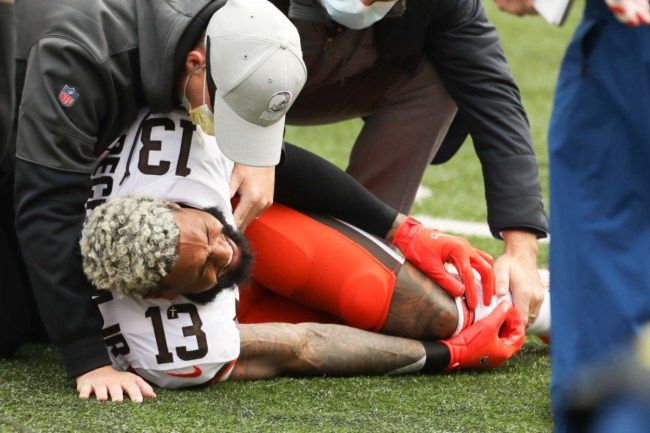 Odell Beckham Jr. falling to the field with a torn ACL early in the Super Bowl was a tough scene to watch. He opened up the Los Angeles Rams’ scoring in their win and was causing fits for the Cincinnati Bengals’ defense before going down with injury.

The story ended with OBJ earning a Super Bowl ring, but it also came with yet another knee surgery for the wide receiver. Going under the knife is never a great thing, but in this case, it may have been for OBJ’s sake.

OBJ suffered a torn ACL in his left knee, and had surgery, while playing for the Cleveland Browns.

"When Odell tore his ACL with the Browns the surgery didn't go as well as anyone had hoped.. this past surgery went really well & probably will extend his career" ~@RapSheet#PMSLive pic.twitter.com/oTgRFg3eQY

Rapoport went as far as to say that the Rams were worried about his knee before signing him to a one-year deal in November of 2021.

“The knee was a concern because it was not 100 percent healthy, and I don’t believe they would have given him a long-term deal just based on the knee because it was troubling,” Rapoport said.

“This past surgery went really well, and he probably is going to have extended his career just because of his recent surgery.”

OBJ is an unrestricted free agent at the moment, but will certainly land with a team prior to the start of the 2022 NFL season. The Rams are reportedly looking to bring him back on a new deal if the money, and his knee, are right.