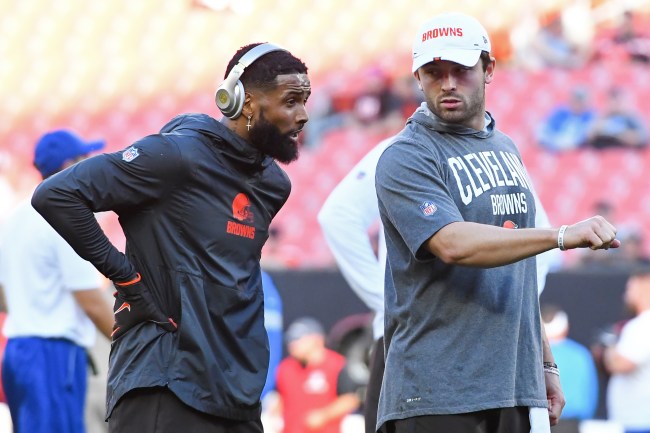 Odell Beckham Jr.’s addition to the Cleveland Browns this past offseason thrusted the perennial losing franchises into the mainstream, with everyone ready to crown them AFC North champs and, possibly, a darkhorse Super Bowl contender — which led to plenty in Vegas putting money on the team. While things got off to a rocky start, as of now, the Browns are 2-2 prior to a Monday Night Football game against the undefeated San Francisco 49ers, with a chance for Cleveland to maintain the top spot in their division.

But after an embarrassing opening game loss to the Tennessee Titans — which led to plenty of hate online — and uninspiring offensive outputs in games against the New York Jets and Los Angeles Rams, people were pointing the finger at quarterback Baker Mayfield, questioning if the former No. 1 overall pick was overrated. That caused the signal-caller to get into it with a few media people, namely Rex Ryan and Colin Cowherd, with whom he’s had a feud with for a few years.

While Mayfield hasn’t played great yet this season, even after a 40-25 victory last weekend against the Baltimore Ravens, one person who wants the media to keep criticizing him is Odell Beckham Jr., who says he likes how his second-year quarterback responds to doubters.

Mayfield, who walked on at Oklahoma and, ultimately, won a Heisman Trophy before becoming the top pick in the 2018 NFL Draft, has proved people wrong his entire football career. For that reason OBJ says to the haters: keep it coming.

“I would just encourage everyone who talks about Baker in the media to keep antagonizing him. Keep making him mad because that’s what you’re going to get,” Beckham said. “This is somebody who’s been fueled off of that all his life, and the more you poke fun at him, the more he’s going to poke back. So I just love to see him in his element and just being him.”

You’ve got to love this from Odell Beckham Jr., who, like Baker Mayfield, has been labeled a certain way by the media. Whether that’s true or not is up for debate — but all indications is that, per ESPN, OBJ’s Browns teammates adore him — which has led to the Browns staying motivated and focused together inside the locker room, ignoring doubters on the outside.

And, because Beckham and Mayfield flourish when they’re being doubted, it’s cool to see the All-Pro wideout coming to his quarterback’s defense, seeing how he responds when another person bashes his game. Hey, if it leads to more wins, Browns fans will be fine with Odell’s challenge to all the haters out there.