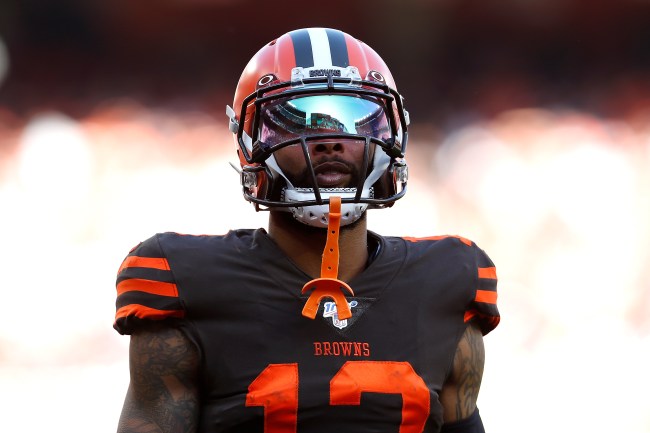 Odell Beckham Jr. might just become this generation’s version of Deion Sanders, guys. While the Cleveland Browns wideout is, arguably, a top-3 receiver in the NFL — and does inhuman things out on the football field — the three-time Pro Bowler recently told Pat McManamon of The Athletic that he’d consider a second pro sport should an expected NFL lockout occur prior to the 2021 season.

As far-fetched as the idea might sound to most of us normal people who weren’t blessed with the athletic skills of Odell Beckham Jr., the wideout — who played multiple sports in high school before focusing on football — told McManamon that he’s at least entertaining the idea should the NFL lock the players out in a couple years. Here’s what OBJ had to say about the idea, per The Athletic.

He was so naturally gifted at all of them that he recently said he’s pondering a Deion Sanders-style move and playing a second sport if the NFL and the NFL Players Association cannot come to an agreement to extend the collective bargaining agreement.

“I don’t know, but I know a lockout is probably coming soon, whenever it is, so we’ll see,” Beckham said during a recent interview.

Sure, that’s a pretty vague comment by the all-world wide receiver, but, given his talents in multiple sports, why shouldn’t we believe that Odell is serious about this claim? After all, does anyone remember OBJ jacking a home run during batting practice with the New York Yankees in the summer of 2018? While it might not have been in a game, that still takes plenty of skill.

Odell Beckham Jr. is only 26 years old, so he’ll still be in the so-called prime of his career come 2021 when the expected NFL lockout would hit. And while his massive contract runs through the 2023 season, per Spotrac, the wide receiver scooped up plenty of guaranteed money on the front end of the extension he signed in the summer of 2018, so he’d have plenty of money to at least try a two-sport career.

A letterman in football, basketball, and track in high school in New Orleans — where he earned all-district selections in both his junior and senior years in hoops, and excelled in sprinting and jumping events in track — Odell Beckham Jr. also played soccer growing up, even being offered a junior national team program tryout in Europe, which he turned down. So, if he’s serious about becoming a two-sport athlete, the guy could channel some of his past and probably pick up right where he left off about a decade ago.