Tom Brady Is Reportedly Pushing The Buccaneers To Trade For Odell Beckham Jr. 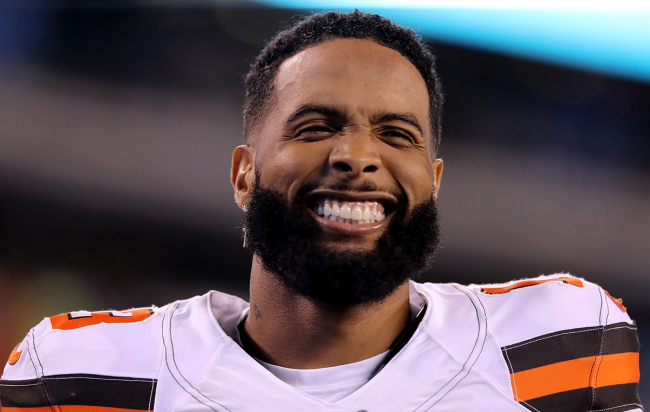 If Tom Brady hadn’t already cemented himself as the G.O.A.T. prior to taking his talents to Tampa Bay last year, he did exactly that when he secured the seventh Lombardi Trophy of his career after leading the Buccaneers to a decisive victory over the Chiefs in Super Bowl LV at the tender age of 43.

You’d think that the legion of Tom Brady Doubters who’ve been forced to eat their words every single time they’ve predicted this will be the season it all comes crashing down would’ve learned from history by now, but they were once again doomed to repeat that fate after he answered the question of whether or not he’s a system QB who really owes all of his success to Bill Belichick once and for all.

Part of the reason Brady was able to win yet another championship was his new team’s willingness to let him call a lot of the shots he never had the chance to dictate during his time with the Patriots, as Bruce Arians wisely took advantage of the knowledge he’s picked up over the course of his time in the NFL and the Buccaneers were more than happy to cater to him when it came to the players he wanted to be surrounded with.

Brady was able to convince Tampa Bay to give Antonio Brown the second chance he may or may not have deserved, and now, it looks like he’s pushing for the franchise to give him another offensive weapon to work with in the form of Odell Beckham Jr.

Last month, ESPN’s Jeff Darlington revealed he’d heard Brady was lobbying for the team to figure out a way to get the Browns to part with the wide receiver, and according to Bleacher Report, Adam Schefter shed some more light on those rumors during an appearance on Monday’s edition of Get Up, where he said he’s also heard that discussion is taking place.

Schefter noted the Bucs are pursuing a variety of options as they gear up to defend the title next season and stressed other potential moves could be a higher priority, saying it will be “challenging to fit a wide receiver in at that number on top of everything else they’re trying to get done there” in reference to the $15.8 million he’s slated to make in 2021.

There’s no doubt Brady would benefit from having Beckham at his disposal, but if we’ve learned anything by now, it’s that he’ll probably be able to figure out a way to win without him.