Odell Beckham Jr. Has Confirmed He’ll Be Playing For The Browns Next Year So Everyone Can Calm Down Now 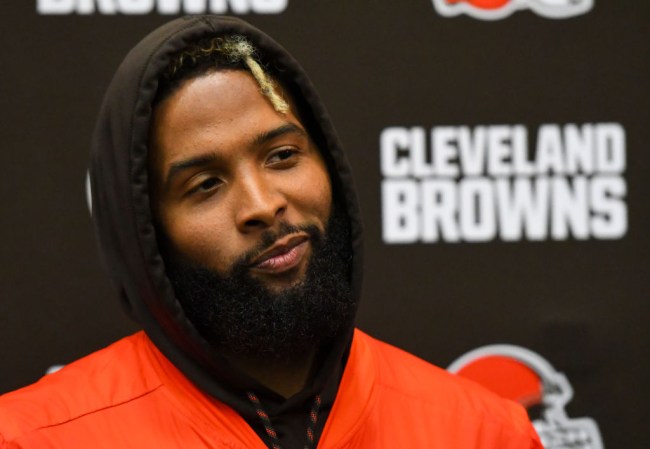 Over the past few years, Odell Beckham Jr. has cemented his status as the most electric wide receiver in the NFL thanks to his all-around athletic prowess and ability to make seemingly impossible catches look practically routine.

He was also arguably the best player the Giants had on their roster last year, which is why it came as quite a surprise when we learned the team had opted to ship its most valuable asset to the Browns in a seemingly lopsided trade that not even Madden approved of.

The deal gave Browns fans the first real glimmer of hope they’ve seen in the past couple of decades, as the addition of the Pro Bowler meant Baker Mayfield would have a reliable target to throw to as he continued to develop his game and Cleveland supporters had higher hopes than Panic! at the Disco heading into the season.

Unfortunately, things haven’t exactly panned out the way most people hoped they would, as the Browns treated the world to yet another underwhelming campaign and saw themselves officially eliminated from playoff contention on Sunday while also assuring they’ll be the only NFL team who didn’t manage to have a winning record at any point during the 2010s.

As if that wasn’t bad enough, Browns fans have also had to deal with a swirl of rumors surrounding Beckham Jr., who has had an incredibly underwhelming season by only racking up 65 yards per game and a mere two touchdowns (although it is worth noting he’s been playing with a hernia).

The drama kicked at the start of the month when we learned the wide receiver spoke to coaches and players during games about getting him the hell out of Cleveland and a video of him telling Jimmy Garoppolo he’d be happy to take his talents to San Francisco only helped heighten the speculation.

Since then, a number of potential destinations have been floated, as Skip Bayless said the Packers were in play while people close to Beckham Jr. claimed the Cowboys could land him.

However, it now looks like we can finally give the rumors some Xanax, a glass of red wine, and tuck them into bed after Beckham Jr. addressed the issue on Wednesday to confirm he’ll be in a Browns uniform next year.

This is undoubtedly good news for Browns fans and I have no doubt that next year will totally, definitely, absolutely be the year you guys turn things around.