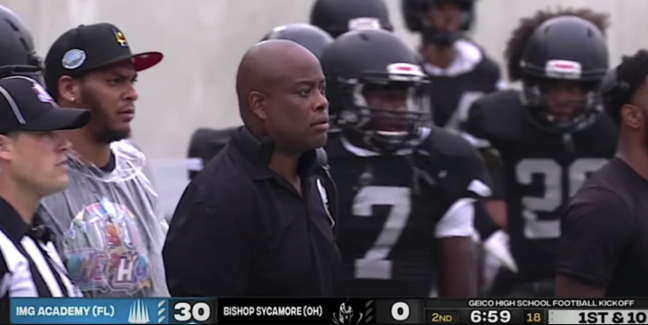 The saga surrounding Bishop Sycamore football has officially come to a close, for now. Ohio’s Department of Education finished its three-month-long investigation into the “high school” and determined what was already known.

It is not a real school.

Governor Mike DeWine has directed the state’s attorney general to investigate the program. It will determine whether the program and its advisors committed any criminal or civil crimes while pulling off the craziest fraud in high school football history.

You can FIND THE FULL WILD STORY HERE, and it’s truly worth the read, but here’s the gist:

Bishop Sycamore first began to gain national attention in August during a brutal 58-0 loss to the nation’s No. 2-ranked high school. Broadcasters in the booth could not identify players from his roster and the safety of the players became a legitimate concern.

The head football coach was accused of forcing players to beat up the homeless, using bounced checks to avoid paying for hotels, facilities and meals, as well as defrauding multiple loans. That was only the half of it.

At that point, every scheduled opponent canceled its games against Bishop Sycamore and Governor DeWine called for an investigation.

Meanwhile, for some reason, Bishop Sycamore’s founder, director and assistant coach maintained that it was a real school. He claimed that the program rented space in a building for classes and that there was a bell schedule.

Based on the Ohio Department of Education’s findings, there was not. It is not and was not ever a school.

However, we also knew that prior to the investigation.

In an interview over Labor Day weekend, Bishop Sycamore’s head coach admitted that there was no academics. He called the team a “post-grad football academy” and later asked people to stop making jokes and slandering the kids.

It was never the fault of the kids. They wanted an opportunity to play top football competition and get looks from college programs and got caught up in a scam.

Now, four months after Bishop Sycamore took the field on ESPN, the coaches and staff will be properly investigated under the law.

“I am today asking Attorney General Yost and other offices with jurisdiction to determine whether the alleged deception by Bishop Sycamore violated any civil or criminal laws,” DeWine said. “I intend to work with the Department of Education and legislative leaders to implement the recommendations contained in this thorough report.”

The craziest part of all of this, perhaps, is that it could still be going on. If Bishop Sycamore had not played IMG on ESPN, they might have gotten away with the fraud.