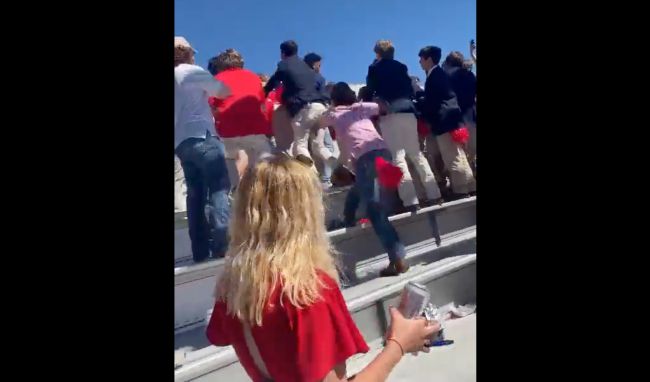 There’s nothing quite like the student section at an SEC football game. It’s a conference filled with tailgating tradition and football superiority. A conference where you’re shunned by some for wearing jeans instead of khakis to a football game. Where the archetypical Saturday uniform for men is sunglasses straps, polos, and boat shoes.

But sometimes, in the moment, people can get a little too carried away with it all…

Old Miss (#14) managed to fend off Kentucky (#7) at home today, 22-19. It’s the first time both teams were ranked in a match-up in over sixty years, making it one of the most meaningful games between the two teams in a long time. Kentucky running back Chris Rodriguez made his triumphant after a 4-game suspension, chalking up a touchdown. But it wasn’t enough against Lane Kiffin, who beat his first top-10 opponent since 2011, back when he was coaching for USC.

Despite the victory, tensions were high between Ole Miss faithful. In the Rebels’ student section, a fight broke out between a group of young men dressed in blazers and khakis and some other standbys in polos and shorts. We’re talking a full-out frat fight, complete with punches and sport coats flying. It’s a tense moment between fans of the same team, which was eventually broken up by a police officer.

The video is going viral on major social media accounts, distracting from the Rebels’ impressive victory.

The video already has over 2 million views on Twitter.

Old Row has footage of the spectacle. Some are alleging on Twitter that it’s a fight between pledges at rival fraternities, but the full story is bound to come out.

Violence is never the answer and there’s no denying it’s a bad look for the school. Have to imagine the University will investigate and take disciplinary action in the coming weeks.

What a bummer of a way to spoil an otherwise great game day in Oxford, Mississippi.