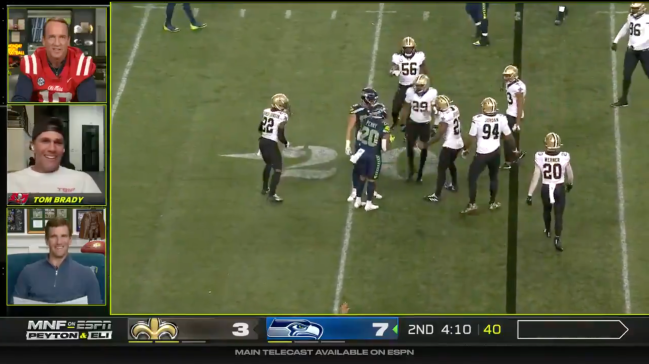 Monday Night Football’s ‘Manningcast’ has taken the internet by storm throughout the 2021 NFL season. After a few weeks off, Eli and Peyton returned to primetime last night and were joined by a few prominent guests.

In addition to Marshawn Lynch taking shots of Hennessy and cussing up a storm, Tom Brady joined the Manning brothers in the first half. The three future Hall of Fame quarterbacks (yes, Eli is getting in and I can’t hear you over his two rings) discussed a variety of topics and it was tremendous television.

As Peyton chopped it up with his former AFC rival, he was wearing an interesting outfit.

Peyton, who went to Tennessee, made a bet with Eli, who went to Ole Miss. When the two alma maters played one another a few weeks ago, the loser would have to wear the winner’s school jersey for the first half of their next Manningcast.

The Rebels won and Peyton was forced to don a No. 10 jersey from his father and two brothers’ alma mater. It was a few sizes too small for him and it was hilarious.

"I didn't want your big head stretching out the neck too much."

It was an incredible night for Ole Miss, as D.K. Metcalf found the end zone to open scoring while Peyton was wearing the jersey.

Brady, who joined the brothers in the second quarter, even made reference to the Rebels. When the game went to commercial with under two minutes left in the half, Peyton suggested that he put on his pajamas so he could get to bed after the clock hit 0:00.

Brady, after weirdly saying “alright baby, I will,” joked that he needed Ole Miss pajamas.

Alright @paris_buchanan! Tom Brady wants some Ole Miss pajamas. Get on it!!! pic.twitter.com/uT2YfGh8TV

Although he might not have had them on Monday, Brady will have some going forward. Ole Miss took note of TB12’s request and got some in the mail on Tuesday morning.

Hey @EliManning, be sure to tell Tommy there’s a package on the way to Tampa!

Brady, remember, lost to Eli twice in the Super Bowl. Now, when he gets into bed at night, he can be reminded of the alma mater of man that beat him.