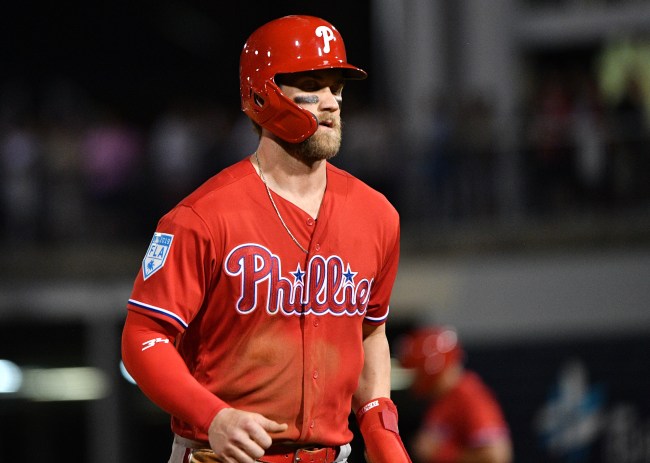 Opening Day in Major League Baseball’s today, meaning some of us are playing hooky from school or work, or coming up with some lame excuse to blow off a Tinder date so we can drink expensive stadium beers with our bros. While, personally, I think today should be a national holiday, others just look at MLB’s Opening Day as one game in a long 162-game season, with the outcomes not really impacting the overall standings.

One thing’s for sure, though, if you’re headed to a ballpark this spring, summer and fall, you’ve got to come armed and ready in your gear. And, let’s face it, there’s nothing more perfect to wear to a baseball game than a jersey — so you best know which players are the most popular.

As Opening Day hits (see what I did there?), Bryce Harper of the Philadelphia Phillies — which is still strange to type — is the leader in the clubhouse. Harper’s No. 1 position breaks a two-year streak from New York Yankees outfielder Aaron Judge, who had been in the top spot on Opening Day the previous couple seasons. That means that, in a matter of a month, Phillies fans have bought Harper jerseys at an extreme rate, since the dude just signed with them on February 28. That’s pretty insane, actually.

Anyway, here’s the top-20 list of the best-selling MLB jerseys as Opening Day begins a new season, per ESPN.

That list is full of All-Stars and even future Hall of Famers, but the most surprising on there? Ichiro Suzuki, who in the Opening Day Series for the Seattle Mariners over in his native Japan a couple weeks ago, and, at age 45, has retired for good. Man, that dude is a legend.

Now that you know which ballplayers have the best-selling jerseys, go grab yourself some peanuts, Cracker Jacks, beer and deal with that “really upset stomach” you’ve got while sitting in your cubicle and head home (or to the ballpark) so you can watch Opening Day the right way. Baseball’s back, boys.