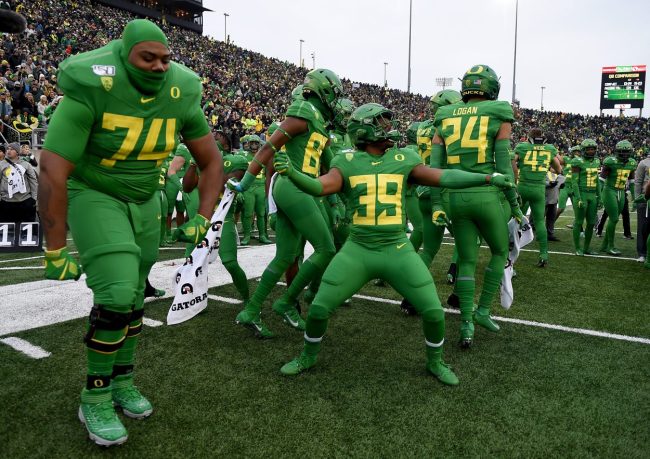 College football bowl season is primarily about the money, but it’s also about the players and making sure they have a good time. Because of the postseason, players are kept on campus during the holiday break and miss out on a lot of opportunities to see their friends and family.

However, in turn, they get to try and finish the season on a high note in one final game (especially for the seniors), they get to go on vacation (some better than others) and they get decked out with lots of swag from their respective games. In addition, they have a lot of fun.

The events leading up to games, during “bowl week,” are intended for the players to take a break from the hustle and have fun. Those events can be anything from team bowling, to a prime rib dinner, to a parade.

In the case of the 2021 Alamo Bowl, the itinerary included a dance-off. Both teams that are participating in the bowl, Oregon and Oklahoma, faced off on Monday night in an epic dance battle.

It was absolutely lit.

Tonight was a movie. pic.twitter.com/hhmEYf45uM

No matchup was greater than that between Ducks receiver Isaiah Brevard and Sooners running back Eric Gray. Gray is from Memphis, TN and Brevard is from Southaven, MS, which is not but an hour from Bluff City.

When the two Memphis (or Memphis-ish) athletes got up on stage, they went crazy. It started off as a competition, but the two ended up unintentionally joining forces and popped off.

The synchronization happened so naturally and could not have been any more smooth. Both teams exploded in cheers while Brevard and Gray came together to shake hands in recognition of the fact that they just ate it up on stage.

Look at the smiles on their faces. That’s what bowl season is all about. Oregon and Oklahoma had a lot of fun and went in.