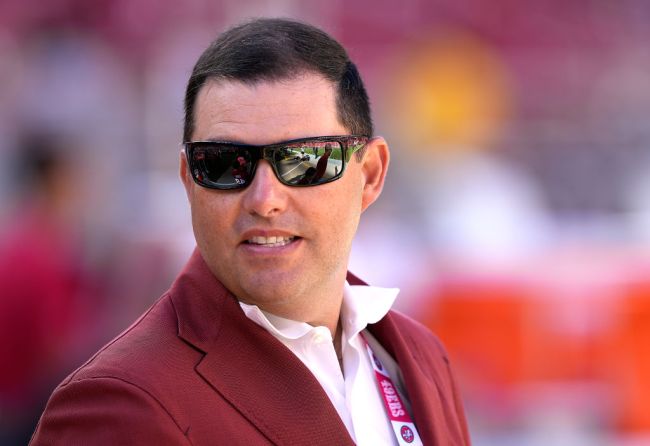 The San Francisco 49ers’ efforts to trade Jimmy Garoppolo are really dragging on as we close in on the start of the NFL regular season. Despite the fact that they have made their intentions to trade him abundantly clear, the 49ers just haven’t been able to find a trade for their starting quarterback.

49ers GM Jed York spoke with The Atheltic’s Tim Kawakami today and revealed that he doesn’t get involved in roster decisions, but is okay with keeping Jimmy Garoppolo.

I’ve said this before, you can’t have enough good quarterbacks and good football players. I’m not going to get into roster discussions and what John (Lynch) and Kyle (Shanahan) want to do, but I will support them in sort of anything that they want to make this team as good as it can possibly be.

For some reason, he proceeded to compare this to the situation with Joe Montana and Steve Young when Young replaced Montana, even though the team hasn’t really seen Trey Lance play yet and Garoppolo certainly isn’t Joe Montana. More importantly, he claimed he would be happy to have Jimmy G on the 49ers’ roster.

Nothing the 49ers have done this offseason makes them seem like a team that is “happy to keep Jimmy”. They have repeatedly said that they intend to trade him and have lamented the fact that his shoulder injury has kept him with the team for this long. He was also listed as the team’s 4th quarterback on their first depth chart of the year.

What this really appears to be is a bluff from the owner of the San Francisco 49ers to try and get a better deal for Garoppolo. Right now, they don’t really have much leverage as everybody knows that they are trying to move Garoppolo before his contract expires and don’t have many teams interested.

Unfortunately for the 49ers, this bluff isn’t likely to help them much and they will probably have to accept a cheap price on Garoppolo to make a trade happen.