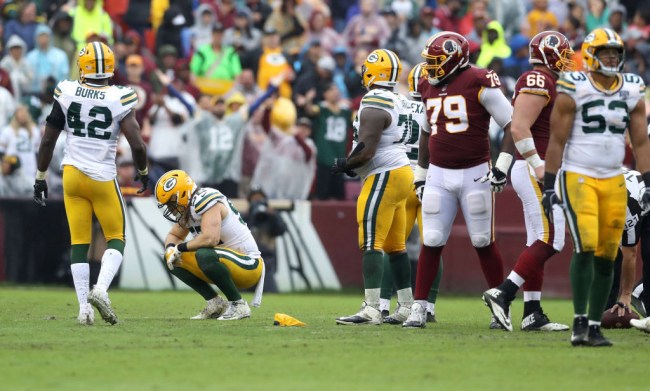 The new tackling rules enacted by the NFL for the 2018 season have many fans, players, coaches, and broadcasters flummoxed. Now, in addition to not knowing what constitutes a catch, people don’t know what constitues a legal tackle.

Even second generation Pro Bowlers like Clay Matthews of the Packers doesn’t know, obviously, since he was flagged for the third time in three games for roughing the passer.

After the game, Matthews basically said he has no idea what to do anymore.

Obviously, when you tackle a guy from the front, you’re going to land on him. I understand the spirit of the rule. I said that weeks prior. When you have a hit like that, that’s a football play. Like I said last week, the NFL’s gonna come back and say I put my body on him but that’s a football play. I hit him from the front, got my head across, wrapped up. I’ve never heard of anybody tackling somebody without any hands. When he gives himself up as soon as you hit him, your body weight is gonna go on him.

I think we’re looking for the hits that took Aaron out last year. That little extra. If I wanted to hurt him, I could have. I could have put some extra on him. That’s football.

Unfortunately, this league is going in a direction that I think a lot of people don’t like. I think they’re getting soft. The only thing that’s hard about this league is the fines they levy down on guys like me who play the game hard. I’m just gonna keep playing hard. Maybe now pass rushers, you just have to attack the ball. I’ve been playing this game for 20 years, that’s how you tackle.

A couple of Packers fans, who like Matthews are very, VERY tired of weak roughing the passer penalties being called, decided to try to help him out by making an instructional video on how to properly sack the quarterback in the NFL of 2018.

How to sack a quarterback in the NFL….wait nvm. pic.twitter.com/EYuOo4qNEq

Seems pretty accurate to me. As well as to others, like future NFL Hall of Famer Charles Woodson.

You forgot to help her up🙄 sorry gotta call it. Unnecessary roughness. $17k fine

Let's not forget you can't "lift" the QB off the ground or wrap them on way down. So definitely a penalty and probable fine coming

Rule 87 Section 4 Article E – “The pillow must make four points of contact with the ground before the quarterback’s head comes within 2 feet of the ground.”

No debating the flag. Good call by the ref

Lmao this is what it’s coming too…Matthews is ready for next week 😂 pic.twitter.com/o9UZAqid9s