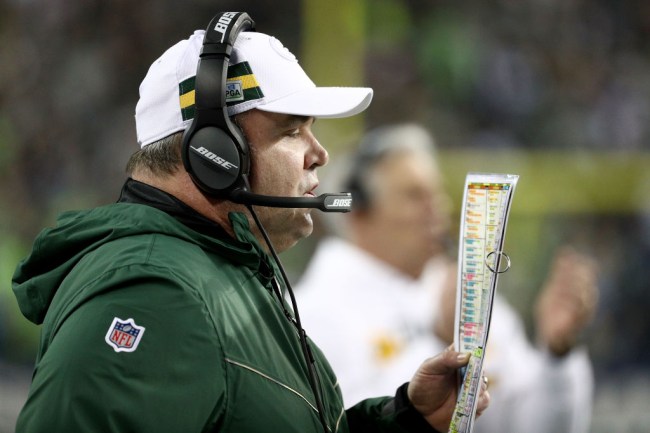 Green Bay Packers’ fans are in desperate need of a scapegoat and Mike McCarthy isn’t doing much to dodge blame. The Packers 13th-year head coach made some questionable decisions in Sunday’s 24-17 loss to the Vikings, which are being treated as a microcosm for a turbulent season that will likely end before the playoffs.

This cannot be your play call on 4th and inches when you have Aaron Freaking Rodgers. By bunching everyone close together, McCarthy is choosing to run into a 10-man box. This is a choice. pic.twitter.com/qBZD5JbMwe

Instead of lampooning Aaron Rodgers’ inconsistent play at quarterback all year, cheeseheads everywhere are calling for the firing of their Super Bowl-winning coach who signed a one-year contact extension with the Packers in January of 2018.

McCarthy will likely be ousted from the job he’s held for over a decade, so instead of critiquing his coaching faults, former Packers safety Will Blackmon recalled some funny idiosyncrasies his former coach displayed. Blackmon was on the Packers roster from 2006-2009, the first three years McCarthy took over as Packers head coach.

When I was on the packers in 2008 We lost 4 straight road games. Every time we lost Coach McCarthy made sure each hotel got worse.

Blackmon’s story was corroborated by several former Packers players who experienced the filth on the road.

@WillBlackmon that’s the Got damn truth. I think my room was outside on the roof

I had no idea until now that he did that to us. I remember my room in Jacksonville smelt like full-blown mold. I assumed it was the nicest hotel Jacksonville had to offer. I didn't realize McCarthy was trying to penalize us.

Lol lol lol Boy you guys are crazy, but so true… https://t.co/DBGjST9Oar

Johnny Jolly’s room was still waiting on forensics to arrive. 😂😂

According to our photographer who was on the trip, Bob Harlan wanted to take a walk, and the concierge told him to go one way and one way only because going the other way would not be a good idea

With the Packers at 4-6-1 at the moment, McCarthy’s gotta be shacking his team up at the Bates Motel.