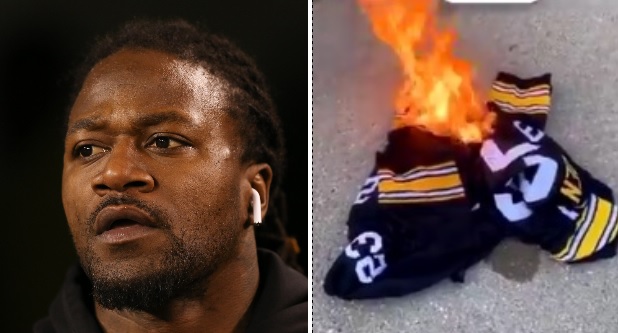 Adam ‘Pacman’ Jones hasn’t played a snap in the NFL since 2018, but he’s still making headlines. It’s been a bit quiet on the Pacman-front since he was arrested at an Indiana casino a little over a year ago for ‘capping bets’ aka cheating at a table.

While this new situation Jones finds himself involved in has nothing to do with the law, it’s still wild.

Earlier in the week, Jones randomly received a box of signed Joe Haden jerseys and reacted in totally normal fashion by lighting them on fire and burning them.

Somebody sent former Bengals CB Adam Jones a box of signed Steelers jerseys and he burnt them all to a crisp, “You know who Joe Haden is?” “Hell no”. 🌾👀🌾
(Warning- strong language). pic.twitter.com/J6xysgCxf1

Haden was quick to jump on social media to deny sending Jones the jerseys. His agent, Drew Rosenhaus, also sent out a note explaining that Haden didn’t have anything to do with the situation.

Jones caught up with TMZ Sports to discuss everything that went on and explained that both he and Haden have talked about it and settled everything. Jones and Haden seem to be on good terms, but he’s still convinced that somebody associated with the Steelers had something to do with the box of jerseys showing up at his house. He even threw a shot at former linebacker Joey Porter suggesting he may have done it.

“I do think somebody over there in that ballpark or whatever they doing over there in ‘piec of shit burgh,’ that somebody from over there sent them,” Jones said. “I wouldn’t even be surprised if Joey Porter sent them.”

Jones also went on to explain that he’s not Rosenhaus’ biggest fan and that he can politely go fuck himself.

“I’m not a big fan of Drew. I have no problem with Joe. For all I care, Drew can go f*ck himself for what it’s worth to me.”

Can you tell things are just a bit slow in the NFL news world? We’re talking about a retired player burning a box of jerseys and then calling out sports agents. Chill out, 2020.