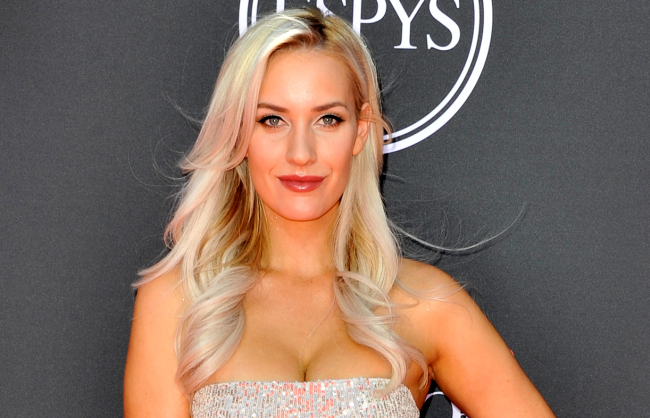 Paige Spiranac took a little break from celebrating and teaching about the World Cup, which she has now done numerous times while not wearing a shirt, a la Brandi Chastain.

On Thursday, the popular golf influencer actually did something on video that we haven’t seen her do in awhile: play golf.

In her newest YouTube video, Spiranac headed to the golf course and demonstrated three pieces of advice that will help any golfer to lower their scores.

Today, Paige Spiranac shared some tips on how to improve your short game and get better around the greens.

Of course, she did so while wearing one of her many fan-pleasing “golf girl outfits.” (She must have been at a public course this week.)

Tip #1: “Most of the time when you’re just off the green, most people will grab a wedge and try to chip it, but Shot Scope says that the data supports putting it is always the best option when you’re off the green. Because when you’re chipping it there’s a chance of you hitting it fat hitting or hitting it thin and you’re always going to hit it closer to the pin with your putter compared to your wedge.”

Tip #2: “Managing your expectations, especially around the greens. A scratch golfer from zero to 20 yards their average is 7.4 feet. Just think about that for a second. I know a lot of people, if they had a seven footer putt for their par, they’d be upset about it, but just shows you how difficult short game shots are and so it’s managing your expectations. And I think once you do that you’re going to feel a lot more confident around the greens and not putting so much pressure on yourself.”

Tip #3: “Another great way to improve your short game is to, again, remove the wedge. We talked about this before. When it comes around the greens that putting is always the best option, but sometimes when you’re in the rough you can’t putt it because there’s too much that you have to get through. So taking a less lofted club like a seven, eight, nine or pitching wedge is a much better option than taking a really lofted club. And this is a personal preference even though the data supports that taking a less lofted club is actually better.”

Paige Spiranac also explained each tip with some actual swings on the course and went much more in-depth in explaining the hows and whys of each tip if you watch the full video below.

Just be sure to make sure you have the sound on.

In a video which has now been viewed almost half a million times, Paige discussed what a massive spectacle the World Cup is and whether or not it has taken over as her favorite sporting event.

“We have the World Cup, the Olympics, the Super Bowl, the Stanley Cup, the World Series,” she said. “We have the Majors in tennis and golf, March Madness, and so much more, but which one is your favorite and why?”

Not surprisingly, Spiranac chose the Masters as her favorite sporting event. However, there were definitely some sporting events that she didn’t mention in the responses to her question that might come as a surprise.