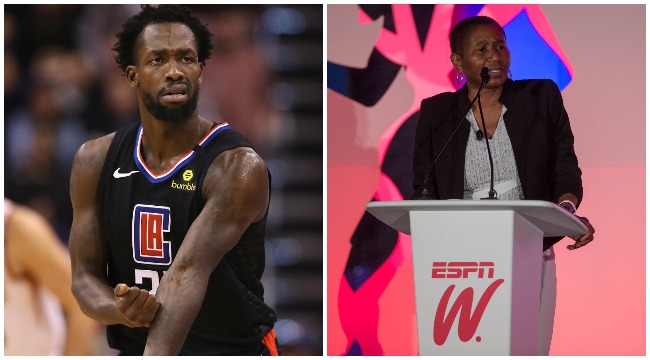 If you thought Patrick Beverley’s barking dog persona was just a facade utilized to gain a competitive edge, this anecdote from the players meeting this week is proof that Beverley’s douche-meter doesn’t have an off switch.

Chris Haynes of Yahoo Sports detailed a wild 48 hours in the NBA world—complete with walkouts, frustration, and conflict surrounding how the players should proceed in the wake of the Jacob Blake police shooting.

Many players, including LeBron James, were irritated with the Milwaukee Bucks boycotting their game without a unified plan of action. Bucks veteran George Hill reportedly took some heat for being the central figure in persuading the Bucks to bow out, and said on Monday, that “we shouldn’t have even came to this damn place” while speaking of the bubble.

Miami Heat forward Udonis Haslem, a veteran with clout among NBA players, reportedly claimed it was irresponsible and selfish to suggest everyone should pack up and go home because the younger players haven’t built up the wealth to forfeit paychecks.

Michele Roberts, the executive director of the players’ union, was then brought in to discuss how the financial ramification of leaving the bubble. Patrick Beverley, for reasons beyond me, found this to be an appropriate time to humiliate Roberts in front of his NBA peers.

While she was going over the numbers, Clippers guard Patrick Beverley abruptly interrupted her, saying he disagreed with her logic, sources said. Roberts kindly reiterated that these were potential losses the players would suffer, and Beverley interrupted again.

Roberts asked politely if she could continue with her point, and Beverley responded, “No, I pay your salary,” sources said.

This caused an uproar with Paul, Haslem and others, who intervened and told Beverley that disrespect would not be tolerated, sources said.

Someone should remind Pat that Roberts is a Harvard Law School faculty member who was referred to as the “finest pure trial lawyer in Washington” by The Washingtonian. She also happens to be the first woman to ever head a professional sports union in America, and he’s out here treating her like a scrub.

Patrick Beverley at the meeting. pic.twitter.com/l9tD49OJzi

The true test of a man’s character is what he does when cameras aren’t around.

Patrick Beverley is who we thought he was.