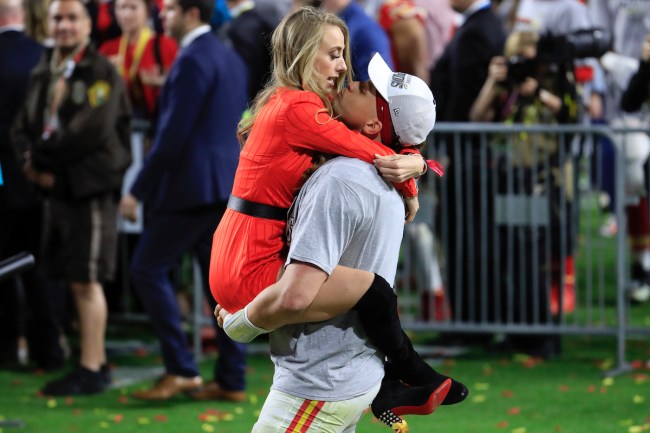 Now that Patrick Mahomes and Brittany Matthews have a daughter, one would imagine the days and nights feel really, really long. While I don’t have a kid (yet), anybody who does knows that the world gets turned upside down for the parents, with very little free time available and, more importantly, the idea of sleep being just that, an idea.

While the NFL world congratulated the Kansas City Chiefs’ superstar on his family’s addition in February following his team’s Super Bowl 55 loss, one place, Texas Tech University — Mahomes’ alma mater — decided to take things a whole step further. That’s because, according to Twitter, the school has already offered an athletic scholarship to Patrick Mahomes and Brittany Matthews’ daughter, Sterling Mahomes, despite the girl being just about a month old.

Sterling Mahomes is less than a month old. She got a national letter of intent for soccer scholarship offer from Texas Tech 2 days after she was born.

What took so long? pic.twitter.com/jwaxccF9F8

The fact that Texas Tech’s Athletics Director, Kirby Hocutt, even spent the time to sign this is pretty hilarious. Like, imagine being the intern who had to try and track down the AD to get him to look at this, agree to it, and then putting his signature on it. As if there isn’t anything better Hocutt can do with his time, right?

Then again, Patrick Mahomes is one of Tech’s most accomplished and polarizing alum, so the university probably didn’t have much of a problem getting a little PR for offering the star quarterback’s one-month-old daughter the scholarship. We all know college sports is big business, and, given Sterling’s genes — which, in addition to Patrick’s, also includes Brittany’s, who played collegiate soccer at UT-Tyler and totaled 31 goals and 16 assists in four seasons — Texas Tech might be genius in thinking 18 years ahead here. Like, what happens if Sterling Mahomes ends up following in her dad’s footsteps, plays for the Red Raiders and becomes an absolute star? Nobody will be laughing then about this sly move.

Still, it’s a little wild to see a kid who’s been on the planet for less than four weeks receive an athletic scholarship to a major university. Such is the world of college sports these days, though.