Coping With The Brady Betrayal 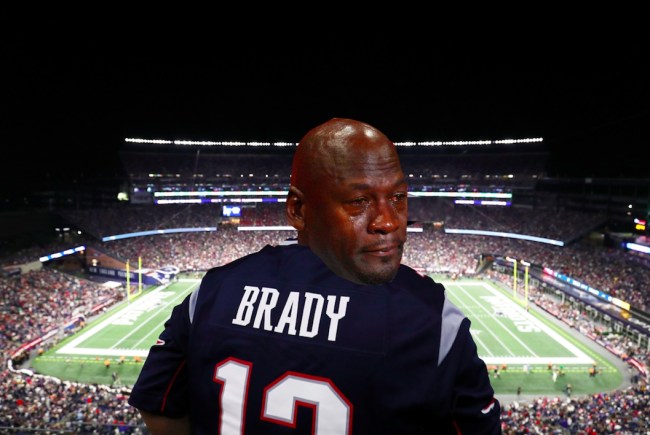 Staring blankly at a wall in my Boston home, I take long pull of my Dunkin’ coffee with extra cream and six sugars. The taste does not register.

My wedding song, Dropkick Murphys’ Shipping Up to Boston plays on loop in the background and for the first time in my life, I’m allowing myself to admit that it is the most annoying fucking song of all-time. As I toss my speakers into the trash, I wonder if I’ve married the wrong woman.

I smoke two Parliaments at the same time, hoping that at least one of them kills me.

Robin Williams flashes on my screen in his role in the 1997 masterpiece Good Will Hunting, providing nothing more than a cold reminder that everyone I love will eventually disappear.

As I pour petrol on the Tom Brady jersey I’ve lived in for the past two decades, my wife reminds me that “It’s just a game,” confirmation that I’ve married poorly.

Images of MY quarterback in another team’s uniform steamroll the defenses I’ve put up in my brain and a hollow sensation terrorizes my stomach, a sensation I haven’t felt since I walked in on my prom date locking lips with Bryce Stevens in the limo I paid for.

Six Super Bowl titles and 20 years of unprecedented dominance does little to numb the pain. You won’t believe me, but it only exacerbates it. 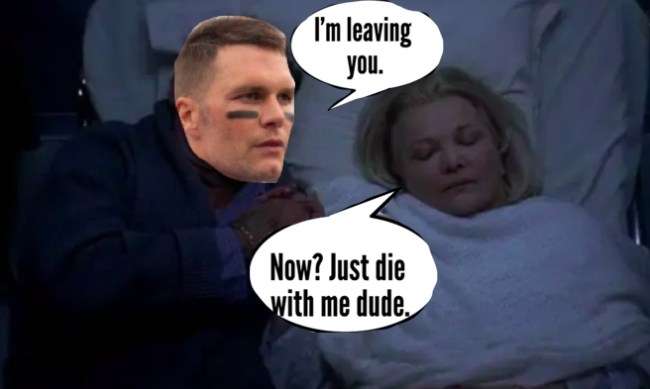 In a sheepish attempt to get acclimated with the new normal, I log onto YouTube and watch Jarett Stidham highlights from Auburn. I’m pleasantly surprised by his pocket presence and progressions, and become confident he can lead us to a disappointing season.

Suddenly, in the midst of the most difficult day in New England sports since the Len Bias draft, I find relief.

For the first time in my life, I can admit something my Tom Brady stannery previously disallowed me too.

and here we have a video of Tom Brady calling his 11 year old son back into the room for a D U M M Y passionate kiss pic.twitter.com/X3xA8xtMrx

This was fucking weird and possibly a felony.