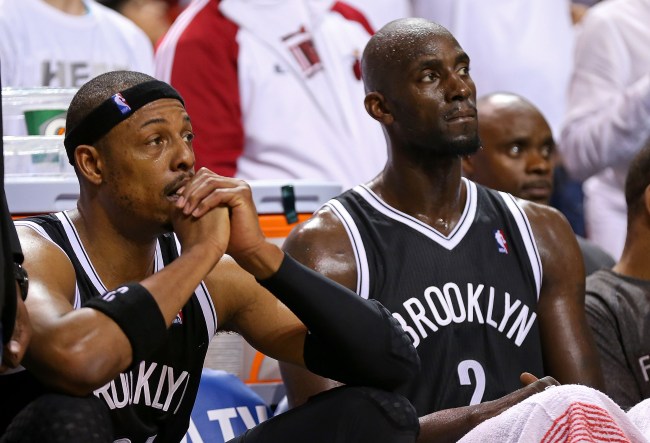 When Paul Pierce and Kevin Garnett got traded from the Boston Celtics to play for the Brooklyn Nets in 2013, it sure was weird AF. Not only did it seem strange seeing the two future Hall of Famers donning the boring black and white uniforms of the Nets, but, given the fact that both were well past their primes at that point in their careers, the whole thing ended up being a bit of a shitshow.

Once expected to challenge the then dominant Miami Heat Big Three — which included LeBron James, Dwyane Wade and Chris Bosh — Pierce and Garnett played just one season together in Brooklyn before both were dealt, and, in that lone campaign, lost in five games to the Heat in the second-round of the playoffs. Needless to say, the experiment failed miserably.

As bad as the overall outcome was for the Nets in 2013, as it turns out, it was even worse than most of us probably know about. That’s because, while appearing on the All The Smoke podcast, Paul Pierce described a moment after a blowout loss on Christmas Day that led him to think that Kevin Garnett was going to punch then Brooklyn head coach Jason Kidd — although, thankfully, it didn’t actually come to that. Here’s how Pierce describes it.

J Kidd come in there. Aw, he yelling. He yelling at us. And I know KG kind of got in J Kidd’s face. I thought he was about to whoop J Kidd. Straight up. I was like. Went up in his face. “I ain’t no whoop whoop.” Had his towel on. He had his towel on, like about to get into the shower, in front of everybody. And then just walked off to the shower. I swear, from that point on, it turned our season around. KG cares so much.

Damn, it sure doesn’t sound as if Garnett was in the holiday mood — unless (possibly) delivering a punch to his coach is his version of giving. ‘Tis the season, right!?

Of course, the story from Paul Pierce is just his interpretation of the whole locker room incident, and didn’t actually come to fruition. Still, Pierce — who played with KG in Boston and had known him for years prior — knew just how intense Garnett could get, so if he had an inkling that the power forward could throw down, there’s probably a good chance it was close to happening.

With Garnett recently selected into the Basketball Hall of Fame, here’s to hoping we get more stories about how passionate and how fierce of a competitor he was. While it nearly led to punching his former coach, it also helped him become one of the best players of all-time.