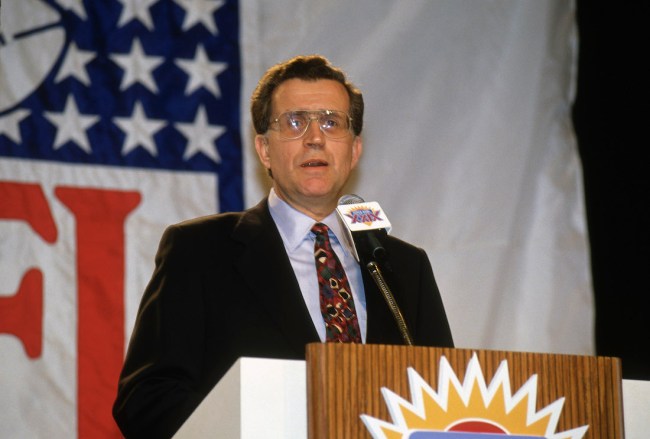 I’ve got mad respect for Paul Tagliabue — who’s about to go into the Pro Football Hall of Fame in a few months following a successful run as the NFL Commissioner from 1989-2006 — but the man sure is out of touch with the modern sports fan these days. Considering the guy is 80 years old, that makes sense. Still, it’s absurd to hear such a smart guy talk about the fears of sports gambling being so associated with the league nowadays.

For context, the NFL and multiple sports gambling partners have formed quite the bond over the past few years, with the league even promoting the (potential risky) hobby in numerous ways. That’s good for business, and only adds more intrigue for fans each season.

But Tagliabue isn’t so supportive of the NFL being so close to the betting world. In fact, the former Commissioner fears that it could possibly present problems in the not-so-distant future.

Talking to USA Today about the NFL expanding its relationship with multiple sports gambling brands, here’s what Paul Tagliabue had to say.

“I worry about that,” he said. “It’s interesting to me. The thing that always made me too hesitant to draw too many conclusions was that there were a lot of scandals (over the years), but they were always in basketball, where the idea is that if you get to one or two players, you can affect the outcome.

“I played in a college basketball game that was fixed,” Tagliabue recalled of a 92-69 Hoyas triumph against NYU on March 2, 1961, near the end of his college career. “We beat the hell out of NYU. It was the biggest victory in my three years of basketball at Georgetown. Turns out that guys at NYU were taking money to shave points.”

A former college hoops player at Georgetown, Tagliabue referenced a point shaving incident that occurred 50 years ago when this type of illegal betting was more like the wild west than it is today. Part of that could actually be because betting on sports was outlawed, so, naturally, you were going to have sketchy people doing bad things in order to make money. It’s sort of like how marijuana being legal and more accepted today has hurt sales on the illicit market — because why go to a drug dealer when you can go to a budtender legally?

Still, Paul Tagliabue fears that one simple incident could screw the entire NFL, adding: “I still worry about some young guy … and someone says to him, ‘Take the money.’”

It’s understandable where the former NFL Commissioner is coming from, but, dude, the times have changed. Betting on sports increases fan interest and engagement. It’s no longer the elephant in the room nobody wants to talk about. And thanks to major sports leagues like the NFL aligning itself with gambling brands, it adds additional revenue via fresh partnerships and sponsorships. That’s good for the league.

Think about some of those times when you watched a sporting event only because of the sports gambling aspect. I’ve done it plenty during the NBA Playoffs, and I’ve previously stayed up late to watch a Monday Night Football game because it impacted my fantasy sports team. That adds value to the league, and is something that Paul Tagliabue might not understand.