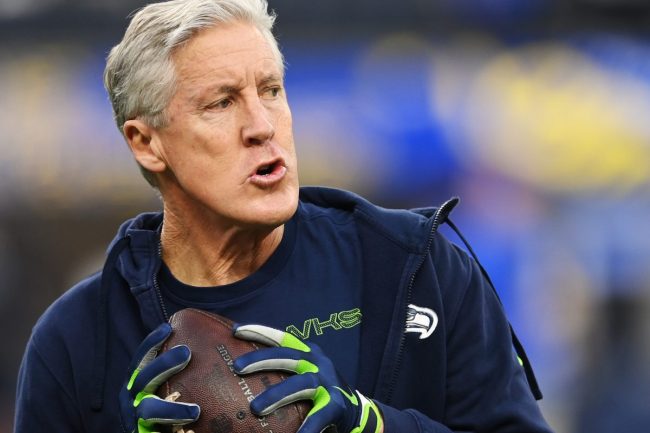 Pete Carroll was seen slinging the ball around a bit at Seahawks preseason camp, working with the offense to help prepare them for the season opener.

Despite what people might say, Carroll isn’t competing for the starting job in Seattle. That competition will be left to Drew Lock and Geno Smith. The team has yet to name a starter for Week 1, though it seemed that Smith held the slight advantage early in preseason. Lock might’ve closed that gap a bit as he landed the start last weekend, but this QB race is still far from decided.

Carroll might just be working his way into another competition, though. One with Hall of Fame passer Brett Favre. The former Packer can often be seen tossing the pigskin around with Jerry Rice in the popular Copper Fit commercials aired throughout the NFL season. But with Carroll’s latest performance, many are saying the job won’t be Favre’s for much longer.

After seeing Pete Carroll toss it around at QB during preseason camp, many are joking that he’s gunning to replace Brett Favre as the new face of Copper Fit. These reactions are great.

What in the Copper Fit shit is this?? https://t.co/yNM9TJYUsH

If not Copper Fit, maybe there’s another advertisement gig that will be calling.

This is a commercial for an acute over-the-counter joint medication https://t.co/pwzyNlAjVd

Here are a few more hilarious replies in the comments section.

The real reason they traded Russ

So this was his plan all along

Carroll will hand the keys of the offense over to either Lock or Smith shortly, but he might’ve just landed himself a gig for retirement.