Internet Is Stunned To Learn The True Story Of Pete Weber, The Iconic ‘Who Do You Think You Are’ Bowler 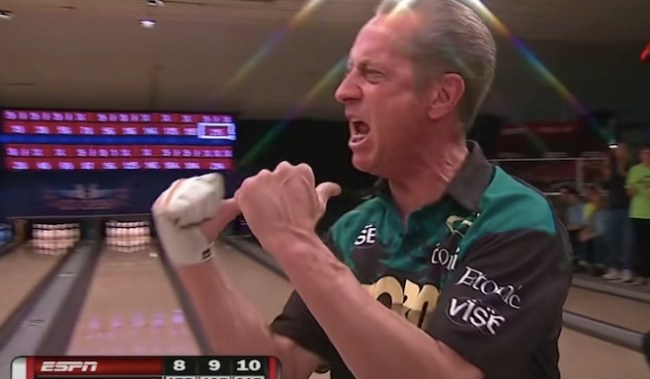 Do you know how Pete Weber is? You’ve certainly seen him before — he’s the infamous “WHO DO YOU THINK YOU ARE?! I AM!” bowler? But do you *know who he is*? Apparently, you’re not alone.

For whatever reason, Weber — who retired from professional bowling in early 2021 — has been going viral in recent days and weeks as someone made an edit of him to a Metro Boomin’ song. The result undeniably goes hard.

Think I just found the hardest bowling edit of all time 🔥 (via jatesmb/TT) pic.twitter.com/pLBTRglqrL

As a result, people who’ve seen Weber’s face over the decades in random bowling highlights are now just learning his life story, which saw a battle with alcohol, drugs, and gambling that cost him an estimated $150,000 between 1982 and 1984 (or at least so he told Sports Illustrated back in 1985).

In fact, Weber said he was drinking a fifth of Jack Daniel’s per night and was doing up to an “ounce or two” of cocaine per week.

From 1982 until March 1984, Pete estimates he blew about $150,000, most of it up his nose, a smaller part on booze and gambling. Cocaine fit his high-energy personality. “From the first line of coke I ever did, I was hooked,” he says. “I loved it. I’ve done weeks when I’ve gone through an ounce or two, eating nothing but fast food. Plus I was drinking, a fifth of Jack Daniel’s a night, easy.”

Any number of sobering experiences failed to sober him up. Someone held a gun to his head in a hotel parking lot in Detroit after he refused to turn down the stereo in his van. He rolled the van over four times down an embankment in Syracuse, N.Y. and walked away with just a bloody nose. He ran to the men’s room and did lines of coke between games. And then there was a bizarre four-week stretch in 1983 when Pete was competing in body only. “I can’t remember anything. Complete blackout.” [via Sports Illustrated]

this clip is hard as fuck for no reason pic.twitter.com/fb3IrjKcbK

How tf does Pete Weber have two of the hardest lines in sports history lmfao. “Who do you think you are? I am!” and “hate me or love me, you watched. That’s all you could do” are INSANE bars https://t.co/pURsE3q6W3

This is the coldest video I have ever seen, Pete Weber is really the goat 🐐 pic.twitter.com/biUZPYhQVo

Somehow missed this but legendary celebration is from 2012.

Here is the bowler Pete Weber explaining his celebration: he was jawing with a heckler and meant to say “who do you think you are rooting against me, I’m the man of this tournament.”

Weber, now 60 years old, ultimately cleaned his act up and won bowling’s U.S. Open a record five times and has won 37 titles on the PBA Tour (10 of which were major championships), which is good for fourth most of all time. He’s also become an irreplaceable figure in the history of sports memes, as evidenced by the last line in his Wikipedia bio, which indicates that Weber “is HIM.”