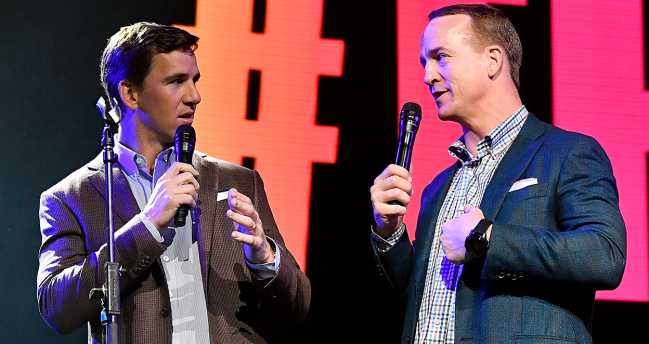 Peyton and Eli Manning know a thing or two about what it takes to succeed both on the gridiron and in life. Between the two brothers, they have four Super Bowl rings, 19 Pro Bowl appearances and countless other accolades that would take too long to list.

Now that both Mannings are retired, they have moved into the world of television. Whether it be with ESPN for Monday Night Football, Frank’s Red Hot, Nationwide, or any other of their on-camera ventures, they are all over the airwaves in a variety of different ways.

Most recently, the two brothers were in South Bend to film a DirecTV commercial with Jerome Bettis.

Looks like this is for DirecTV Stream and the other filming was for NFL films 🎥 #NotreDame #GoIrish but I still believe after all the events were done Arch Manning was a discussion at the Notre Dame Lake House with Marcus Freeman and the current ND players with Brady Quinn ☘️ pic.twitter.com/rIKYMi1h5o

No, they were not there to discuss Arch’s recruitment to Notre Dame.

However, while they were there, they did take the time to speak with the Fighting Irish football program.

During the meeting at Notre Dame, both Eli Manning and Peyton Manning shared what they believe it takes to be great both on and off of the field.

For Eli, he spoke about how Michael Strahan was the only person on his mind as the Giants neared their first championship with him at the helm.

“But you have that (feeling) for every player. I wanted to win a championship for Victor Cruz and Hakeem Nicks and Mario Manningham. Afterwards, they told me they wanted to win one for me so I’d have one more than my brother. It comes together. You have a reason, and it’s not just about you.”

For Peyton, he talked about the most talented players he ever saw in the NFL and how they got to that point.

“The best teams I played on, our best players practiced the hardest every day,” the older brother shared. “They set the example every day. They were sitting in meetings taking notes, paying attention, and our young players were like, ‘Holy cow. This is how they do it here. I’m going to take notes. I’m going to pay attention.’

“We got on the practice field and it was full speed. Taking snaps full speed. Walk throughs, everybody is intense. We’re calling audibles like it was a game. To me, that sets the tone. Talented players who are unselfish set the example in the building of what it’s going to take to be a Notre Dame football player.”

Here are the highlights from each of their speeches to the team:

"Talented players that are unselfish and set the example of the building is what it's gonna take to be a 𝗡𝗼𝘁𝗿𝗲 𝗗𝗮𝗺𝗲 𝗳𝗼𝗼𝘁𝗯𝗮𝗹𝗹 𝗽𝗹𝗮𝘆𝗲𝗿."#GoIrish pic.twitter.com/4Y5F90eijG

Both Mannings have seen success at the highest level. Their advice does not come without a history of knowing what it takes to get there.