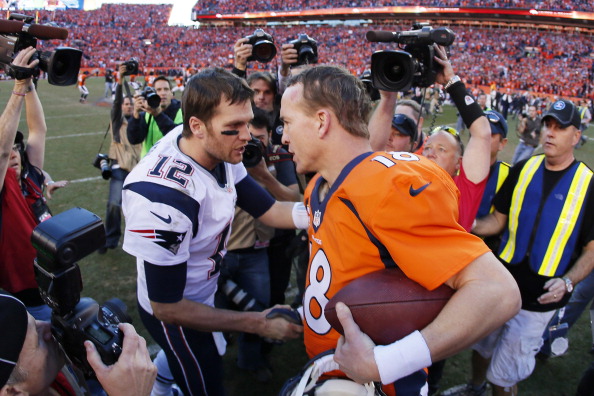 Tom Brady and Peyton Manning have played against each other 17 times throughout their football careers. In those 17 games, Brady went 11-6 against Manning which includes an 8-4 record in the playoffs. Even though Brady thoroughly owned Manning throughout his career, ESPN decided to put Manning way ahead of Brady in their ridiculous “dominant 20 athletes of the last 20 years” list.

PEYTON MANNING
NFL DOMINANCE RATING: 12.7
Perhaps the greatest testament to Peyton Manning’s sustained excellence? He made being elite look ordinary; he was just that good. The 539 passing touchdowns, an NFL record. The 71,940 passing yards, also a league mark. The 186 wins at quarterback, the most in the NFL at the time of his retirement — a record that he held until last October, when foil and fellow ridiculously dominant QB Tom Brady seized that honor. Ponder the sheer amount of year-in, year-out greatness required to amass those numbers. Those 539 TDs? He threw for at least 25 touchdowns in 16 seasons — three more than Brady. The 71,940 yards? He racked up 4,000-yard seasons before they were de rigueur, reaching that mark 14 times overall (more than any other quarterback) and every year from 1999 to 2004, when no other QB did so more than two times. The 186 wins? Those can add up when you boast a .750 winning percentage (or better) against half the league. Dominating opponents? Nothing out of the ordinary. –Hallie Grossman

TOM BRADY
NFL DOMINANCE RATING: 6.3
If it’s true that you are what you eat, the famously health-conscious Tom Brady is nuts (and crucifers, greens and a sizable cistern of water). His career numbers are nuts too: Brady claims more postseason wins as starting quarterback (27) than do 27 franchises. His Super Bowl victories (five) outnumber the all-time playoff-win tallies for one team (the still new-ish Texans) and match another’s (the not-at-all new-ish Bengals). Since 2006, Brady has six of the top 30 postseason QBR performances — his closest competitor is Peyton Manning, with three — and he has the top single-game playoff QBR, 98.0 vs. Jacksonville in 2007. And lest you think Brady burns brightest only on the big postseason stages, his long-term success is also staggering: Since 2007, only 13 QBs without their own branded cookbook have thrown at least 34 touchdown passes in a season, while Brady himself has averaged 34 TD tosses for those years; and his 341/82 TD/INT mark since ’07 is the league’s best. Let’s face it, he’s bananas (but only when mixed in a smoothie). –Hallie Grossman

Of course the Internet had some thoughts about ESPN putting Manning over Brady.

This must be the stupidest list in the history of all lists…Manning #3??…Brady #20??!…Really?!? 😂 I guess ESPN really wanted those clicks no matter what huh? @PKStatsBlog #SMH pic.twitter.com/iTMmzcpXk4

ESPN fighting with Fox sports to get Manning on their talking head shows = rating higher than Brady.

Manning better than Brady?? Seriously?? @espn trying WAY too hard to get Peyton in their broadcast booth. https://t.co/s6NKTP7qWL

ESPN really has Peyton Manning at #3 most dominant athlete in the past 20 years and Tom Brady is last at #20…. who decides this shit? 😂😂

Hey @espn, you wonder why you are losing sports fans…. this might be a reason why. This list is a farce. Manning #3 and Brady #20….. or maybe we could forget that fact that you left off Kobe and Michael Phelps, shall we?https://t.co/JE4JHhQj3e