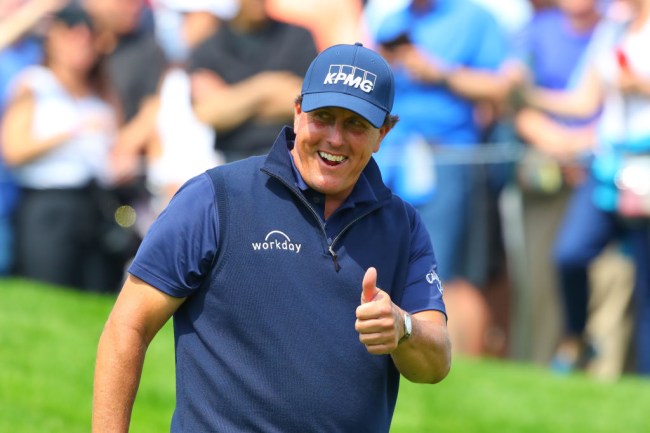 Phil Mickelson turns the big 5-0 today. It’s hard to believe Lefty is half a century old seeing as how he hardly acts his age, which is exactly what makes him so special and one of the greatest sports personalities of all time.

His many, many battles with Tiger Woods over the years, 44 PGA Tour wins, five majors and induction into the World Golf Hall of Fame in 2012 make him a legend of the game. However, it’s his unique personality, his roller coaster of ability to get around a golf course, and now his dominance on social media that has kept him a top name in golf among every age group.

Mickelson is 50-years-old and hasn’t been a Top 10 player in the world since 2014, yet he’s still one of the most beloved players in the game. He’s still one of the must-see guys on every Tour broadcast and, as long as Woods isn’t in the field, has the biggest gallery at every tournament he tees it up in.

As for the not so positive side of things, Mickelson’s collapse at the 2006 U.S. Open and the fact that he’s still chasing that major title to complete the career grand slam will always have people coming to his corner.

It’s the thumbs up to the gallery, the big smile, the quirkiness, and now even the dad jokes that keep people coming back to Mickelson. He can still golf his ball as well and has earned two wins each of the past two seasons after going almost five years without hoisting a trophy.

On August 22 of 2018, everything changed for Mickelson. This was the day he joined Twitter and we got an even better glimpse into Lefty’s world. Shortly thereafter, in November, Mickelson joined Instagram and we were soon introduced to ‘Phireside With Phil’, an inside look into the transformation of his calves, stories about fasting and coffee blends, and practically anything inbetween.

We can’t forget about ‘hitting bombs’ and ‘hellacious seeds’ and what the difference is between the two.

While he may be eligible for the senior tour now, he’s already said “when I stop hitting bombs I’ll play the Champions Tour,” so lucky for us, it sounds like we still have a heavy dose of Mickelson yet to come.