Phil Mickelson Apologizes To Golf Nerds Who Said He Disrespected The Sport At The U.S. Open 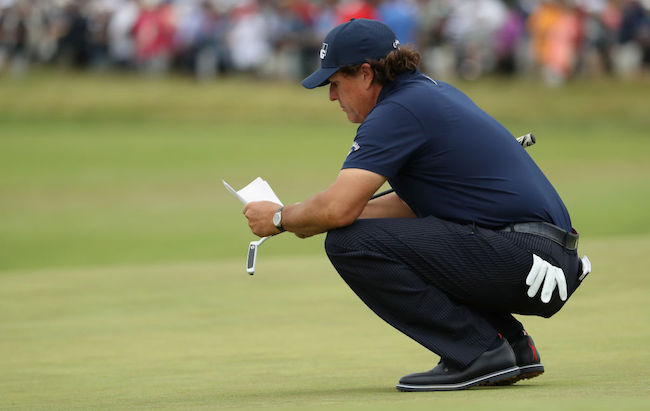 If you’re a golfer who gets excited when you record a score below triple digits over the course of 18 holes, then you probably loved watching the 2018 U.S. Open. The tough conditions at Shinnecock Hills managed to make some of the world’s best players look like absolute hacks, which inspired one competitor to dub the tournament “clown golf.”

As the weekend went on, players became increasingly frustrated, and nothing really summed up the overall mood of this year’s Open than when Phil Mickelson decided he’d rather take the penalty that comes with stopping a moving ball instead of ending up back in the bunker he’d just shot out of. The move caused a massive uproar among people who take golf a little too seriously, with many calling for him to be punished with a disqualification.

However, Mickelson was allowed to continue to compete in the tournament he had no shot at winning but he didn’t do himself any favors after the round when he admitted that his decision was inspired by a mix of frustration and gamesmanship. However, it appears Lefty has learned the error of his ways, as Sports Illustrated reports he sent out a text to members of the media to apologize for desecrating the sport.

““I know this should’ve come sooner, but it’s taken me a few days to calm down. My anger and frustration got the best of me last weekend. I’m embarrassed and disappointed by my actions. It was clearly not my finest moment and I’m sorry.”

This will likely cause the whole incident to blow over but I’m sure Patrick Reed was pumped to have a few days where he wasn’t the most hated person on the tour.