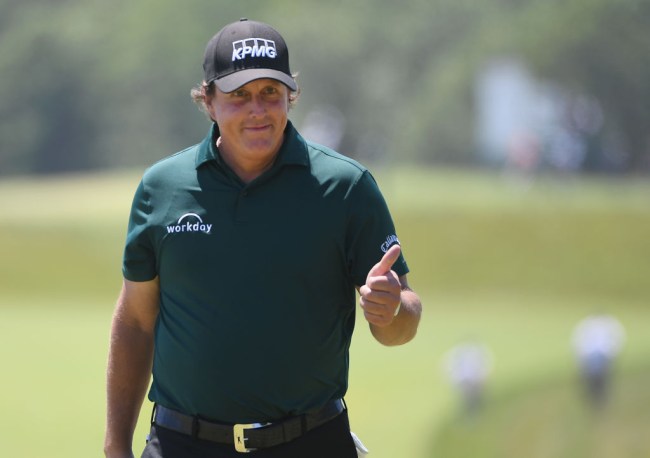 Phil Mickelson managed to make a bit of a name for himself as a high school golfer in San Diego and it didn’t take long for him to make a much bigger name for himself after enrolling at Arizona State in 1988, as he spent his college career absolutely dominating the links to a point where many consider him to be the greatest amateur golfer of all-time.

Lefty graduated in 1992, and over the course of the previous four years, he’d managed to win three individual NCAA championships (as well as helping his team secure a title) but had also tried his luck at 18 PGA events—including five majors—and even managed to beat the entire field of pros at the Northern Telecom Open in 1991.

As a result, Mickelson found himself hounded by phone calls during a senior year that saw him fielding offers from agents and potential sponsors that took priority over most of his classes until he was informed he wouldn’t get to walk at graduation if he kept skipping them.

He ultimately earned his degree and turned pro almost immediately after leaving the stage but stayed in Tempe for the time being while holding onto the final vestiges of a life that would soon become anything but normal.

He was still living there in August when Guns N’ Roses rolled into town (or, more accurately, 30 miles away from it) and decided to make the pilgrimage to see Axl Rose and his merry band of misfits rock the stage just weeks after they’d sparked a riot at a show in Montreal.

The band managed to avoid causing the fans in Arizona to revolt but the event was still a logistical shitshow thanks to the nature of a venue that wasn’t prepared to handle the influx and eventual exodus of traffic.

The golfer found himself in a limo that was stuck in gridlock in the early hours of the morning, and after getting fed up, he did what anyone in his situation would do: hop on the phone and try to get a helicopter to pick him up.

It sounds absurd, but after someone on Twitter mentioned they were witness to the moment, he chimed in to confirm its veracity.

Mickelson was apparently attempting to put a sponsorship check to good use, and while he was ultimately unsuccessful, he got a consolation prize after he ran into the woman he’d eventually marry after finally getting back to campus.

I met my wife Amy that morning. She was going to her 7:40 class as I pulled in. I’ll never forget it.