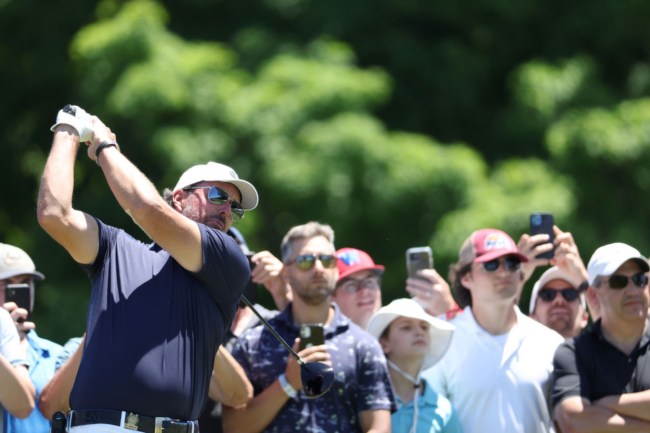 Phil Mickelson undoubtedly lost some of his fans after calling the PGA Tour a dictatorship and signing with the Saudi-backed LIV Golf Invitational Series. Mickelson has millions of fans worldwide, however, and he certainly hasn’t lost them all amid the controversy he’s found himself in over the last handful of months.

The six-time major winner is teeing it up in this week’s U.S. Open at Brookline, his first start on U.S. soil since January, and some fans are excited to see him back on the course throwing out his signature thumbs-up gesture.

Videos from The Country Club on Tuesday show fans still lining up to get a glimpse, and maybe a signature, from Lefty.

A lot of love for Lefty at The Country Club. 👍 pic.twitter.com/iNOsY5l6AR

Phil hamming it up in the crowd on every hole.

While the galleries for Phil in those videos aren’t ginormous by any means, they’re certainly not bad for a Tuesday afternoon practice round. It’s a very real reminder that social media is not real life. Plenty of people may be furious with Mickelson on Twitter, but there are still plenty of Phil supporters out there just wanting to watch the man play golf.

Mickelson and other players who have signed on with LIV Golf will receive some boos and jabs from the gallery this week and continue to be called out by certain media members. The 51-year-old will likely still have the largest gallery of any player this week filled with people escaping the outside noise, or not caring about anything but seeing Mickelson in the moment.

At the end of the day, Mickelson has 45 PGA Tour wins, helped evolve golf into what it is today, and has been the most popular golfer in the world over the last 30 years not named Tiger Woods. Right or wrong, that isn’t escaping people’s memory because he’s decided to go collect a paycheck with LIV Golf.