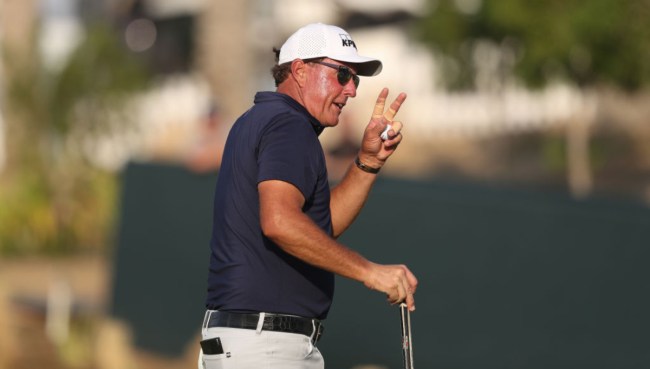 The same day it was reported that Tiger Woods turned down a nine-figure offer to join LIV Golf, the Saudi-backed circuit announced that Woods’ longtime rival, Phil Mickelson, has joined the breakaway league.

Mickelson will play in LIV Golf’s inaugural event outside of London on June 9-11.

“Phil Mickelson is unequivocally one of the greatest golfers of this generation. His contributions to the sport and connection to fans around the globe cannot be overstated and we are grateful to have him. He strengthens an exciting field for London where we’re proud to launch a new era for golf,” said Greg Norman, CEO and Commissioner of LIV Golf, via a press release.

While Mickelson hasn’t played a competitive round of golf since February 6, the news of him officially joining LIV Golf is no surprise.

In mid-February, it was revealed that Mickelson had been involved behind the scenes with LIV Golf. He made major headlines after making shocking remarks about both the Saudis and the PGA Tour in an interview with Alan Shipnuck of The Fire Pit Collective.

Mickelson said that he had enlisted three other “top players” to pay for attorneys to write the breakaway league’s operating agreement. He went on to call the Saudis “scary motherf–kers” while also explaining he was intrigued with the opportunities they may present.

In that same conversation, he called the PGA Tour “a dictatorship” while taking a jab at Tour commissioner Jay Monahan as well.

Five days after his conversation with Shipnuck was published Mickelson issued an apology saying he thought the interview was “off the record.”

Mickelson mentioned LIV Golf Investments by name in his apology, and even says his experience was “very positive” with them despite calling the backers “scary motherf–kers.” He didn’t mention the PGA Tour by name, but instead used the statement of “golf desperately needs change.”

Lefty essentially went into hiding after issuing his apology with most assuming he’d eventually announce that he would be heading to LIV Golf.

The field for the inaugural LIV event was released on May 31, but Mickelson’s name was surprisingly missing. Six spots remained open for “commissioner’s invites” and qualifiers, and we now know Mickelson was the commissioner’s pick.

Mickelson, alongside Dustin Johnson, now appears to be the face of the Saudi-backed golf league.

Three months ago, the PGA Tour paid Phil Mickelson $6 million and Dustin Johnson $3 million as part of the Player Impact Program. Now they've both essentially left the tour behind for LIV Golf.

Money talks. The more money, the louder it talks.

Phil Mickelson officially listed in the field for the LIV Golf opener in London.

Hearing from a source that Mickelson signed a contract Saturday night worth ~$200 million.

🚨 OFFICIAL: Phil Mickelson joins the LIV golf league and will tee it up this week in London. At long last, he’s back. Wow.