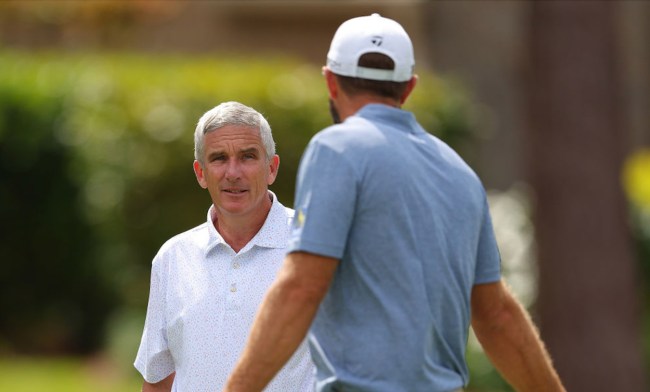 PGA Tour commissioner Jay Monahan has reportedly come to an either-or decision when it comes to Tour players playing in the Saudi-backed LIV Golf Invitational Series.

According to ESPN’s Mark Schlabach, the commissioner met with several agents of PGA Tour players and shared a message with them: “choose the PGA Tour or the LIV Golf Invitational Series; players won’t be allowed to play on both circuits.”

Monahan’s ultimatum is consistent with previous warning shots he fired about Tour players playing in LIV Golf events. His message comes less than 24 hours after LIV Golf released its list of players who will compete in the inaugural event in London on June 9-11.

Dustin Johnson was the most surprising name in the field of 48 players. LIV Golf listed a total of 42 players set to participate, with the final six spots going to qualifiers and “commissioner’s invites.”

Back in early May, PGA Tour players who sought permission to play in the first event were denied. It was assumed that those looking to play in LIV’s first event would have a good chance of being granted permission with the event being held overseas.

Clearly, that’s not how the PGA Tour sees it, and its stance on the situation has not changed.

The PGA Tour released an official statement on Wednesday as well, making it clear that players who tee it up in LIV Golf events could face disciplinary action.

Based on Monahan’s ultimatum, Tour players could be facing a lengthy suspension or possible ban if they choose to play on the rival circuit.

The inevitable conclusion here will be decided in court at a later date, but Monahan is certainly flexing every bit of muscle he has at the moment.

Related: Rory McIlroy Shares What He Thinks PGA Tour Should Do To Players Playing In LIV Golf’s First Event