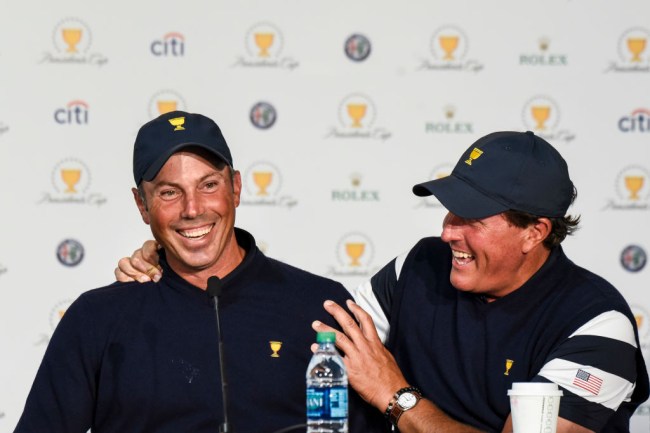 It’s safe to assume that the walls of a private plane flying around professional athletes have seen and heard quite a number of things. While the majority of PGA Tour players are flying around the world just like us normal folks jam-packed on a commercial flight, the elite like Phil Mickelson who has earned over $90 million on the PGA Tour alone, gets around on a private plane to most stops.

Since it’s Mickelson’s plane, he calls the shots as to who gets to fly around with him and his former caddie Bones Mackay shared quite the story involving Mickelson, Matt Kuchar and said private plane.

During the broadcast of this week’s Sony Open, the caddie turned golf commentator said that one year at the Houston Open, Kuchar didn’t feel like flying commercially to Augusta so he hung around after the round and asked Mickelson if he could fly over with him on his plane.

No big deal, really, Augusta isn’t the easiest place in the world to get to unless you can fly into the town’s small airport.

Mickelson told Kuchar he could join him on the flight over, but lefty laid down the law. Kuchar and Phil are two guys that chat it up and take subtle jabs with guys on the course, but Mickelson wasn’t going to let Kuchar give him a hard time on his own plane. Mickelson looked at him and told him that if anything goes down, he’d land the plane wherever the incident went down and put Kuchar on a bus to get to Augusta.

(You’ll need to click on the link below to read the full story.)

Bones just told an all time Kuch-Phil story on Sony broadcast about them going at each other all the time. Wrote the whole thing down. Too good not to @GolfDigest pic.twitter.com/y4U0jG12py

This is a pretty on-brand Mickelson story, for sure.

You can easily picture Mickelson and Kuchar getting on the plane with huge grins on their faces, Kuchar sits down and gets all comfortable and all of a sudden Mickelson looks over at him and basically tells him to behave himself.

It’s, of course, a half-ass threat, one in which Mickelson probably made with a smile on his face and arm around Kuchar’s back, but then again Mickelson pulling out a flex move like landing the plane at a random airport and telling Kuchar to get off wouldn’t be the craziest thing in the world.