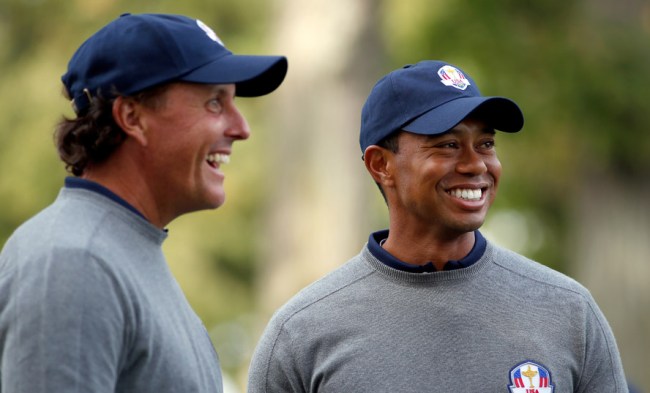 Tiger Woods and Phil Mickelson have a very detailed history together that includes some pretty epic battles. Given their success on the PGA Tour, the fact that they’re only five years apart in age and with both of them sharing the No. 1 and No. 2 spots in the game for so many years their relationship has been a bit up and down.

Woods, who’s won 82 PGA Tour events, has seemingly had Mickelson, owner of 44 PGA Tour wins, on his coattails throughout his career. From Mickelson’s point of view, he’s witnessed first-hand Woods taking over the world of golf and had to play catch up so to speak given Woods’ dominance over the last 20+ years.

Despite the fact that neither of them is getting any younger and other names have burst onto the scene over recent years, the Tiger-Phil rivalry still moves the needle in a major, major way.

Mickelson joined The Dan Patrick Show on Monday to discuss the pair’s upcoming match for charity. Not only did he share a funny story about playing catch with Tom Brady at Augusta National a few years back, but he also talked about his relationship with Woods and when their relationship hit a ‘turning point.’

“I’ve always had this respect for what he’s done for me and my family because nobody has benefited more, but I think our relationship turned around in 2016 when we worked together for the [2016] Ryder Cup,” Mickelson explained.

“He was an assistant captain, and we ended up spending a lot of time on the phone getting ready, talking about players, picks, statistics, alternate shot, course setup and all these things. And getting an idea to see how prepared he was and how meticulous with each little thing, I had a new respect for him. But when we worked together for a common goal, which was to win the Ryder Cup, it brought us closer. I think that was kind of the turning point.”

Woods was recovering from back surgery during the 2016 Ryder Cup, hence him being an assistant captain and not an actual competitor that year, but as Mickelson clearly puts things, he had an impact on that American team. Mickelson went 2-1-1 at that year’s Ryder Cup as the U.S. won for the first time since 2008.