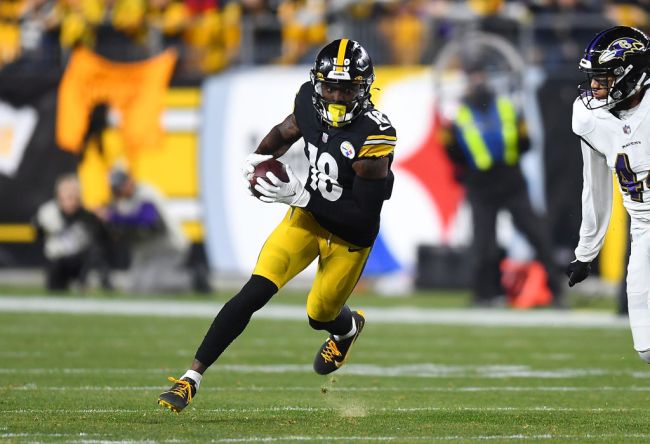 Throughout this NFL offseason, wide receivers across the league have been fighting to get the contracts they believe they deserve.

Davante Adams let the Packers to become the league’s highest paid receiver. Tyreek Hill left the Chiefs for a huge contract. AJ Brown was traded to the Eagles to secure a big contract extension. Stefan Diggs secured a raise from the Bills. Deebo Samuel and Diontae Johnson are still fighting for their raises.

Neither player has shown up to their team’s OTAs and today, the Pittsburgh Steelers star receiver posted a cryptic tweet that seems to be related to his pursuit of a contract extension.

A combination of the new wide receiver market and Johnson’s impressive 2021 season just might be enough to convince the Steelers to secure a future with Johnson right now before he has the chance to negotiate with other teams.

Johnson followed up his 88-923-7 2020 season with an impressive 107 catches for 1161 yards and 8 touchdowns for the Steelers in 2021. That performance earned him his first career Pro Bowl selection and established him as one of the NFL’s best receivers.

Numbers like that have to have the Steelers a bit worried that they could lose their top receiver at the end of the season if they don’t offer him the money he’s looking for before then. Johnson will be an unrestricted free agent after the 2022 season and we’ve seen this offseason that receivers will go wherever they have to in order to get paid what they deserve.

If he does leave, the Steelers already have Chase Claypool on the roster and just drafted George Pickens, so they wouldn’t be without options, but they’d surely prefer for their top receiver to remain a member of the team as they transition to starting Kenny Pickett at quarterback.