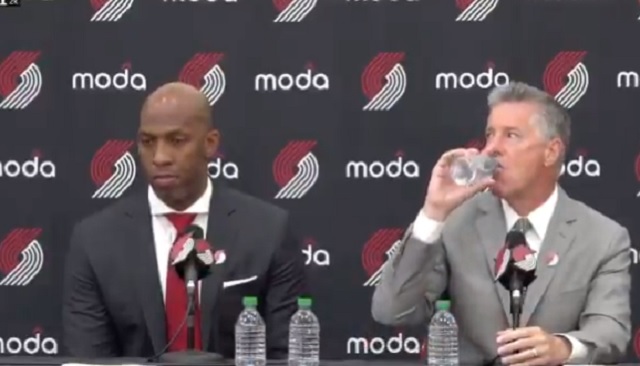 The Portland Trailblazers clearly did not want Chauncey Billups answering questions about his 1997 sexual allegations during his introductory press conference.

For the past week, the Blazers have been at the center of controversy after receiving backlash for hiring Billups, who was once accused of committing sexual assault in 1997.

On Tuesday, Blazers GM Neil Olshey addressed the media and told them the team had conducted their own investigation into the allegation and found that it cleared Billups’ of any wrongdoing.

“We commissioned our own independent investigation into the incident in question 1997,” “The findings of that [investigation] corroborated Chauncey’s recollection of the events, that nothing non-consensual happened. We stand by Chauncey, everyone in the organization, and believe he’s the right person to be our head coach and the right choice to be an ambassador in the Portland community everyone is accustomed to.”

Billups also spoke about the allegation during the press conference.

“Before I even talk about my role, with the team and me being the head coach, I first want to talk about … the incident that happened in 1997,” “There’s not a day that goes by that I don’t think about how every decision we make could have a profound impact on a person’s life. I learned at a very young age as a player, but not only a player but a young man, a young adult, that every decision has consequences. And that’s led to some really, really healthy, but tough conversations that I’ve had to have with my wife, who was my girlfriend at the time in 1997, and my daughters about what actually happened and what they may have to read about me in the news and the media.

“But this experience has shaped my life in so many different ways. My decision-making, obviously. Who I allow to be in my life, the friendships and relationships I have and how I go about them. It’s impacted every decision that I make and it’s shaped me in some unbelievable ways. I know how important it is to have the right support system around you, particularly in tough, difficult times.”

During the Q&A portion of the press conference, reporter Jason Quick tried to ask Billups’ a follow-up question about how the sexual assault allegation “shaped him in unbelievable ways” but was quickly shut down by the Blazers’ PR person.

Jason Quick just asked Billups to discuss his comments about the 1997 allegations shaping him and Trail Blazers PR shut it down, refusing to let Billups even respond.

Here is Trail Blazers PR shutting down a valid question from @jwquick about Billups and the 1997 sexual assault allegations.

It’ll be interesting to see if reporters continue to ask Billups questions about the allegations and how the Blazers respond to those inquiries.