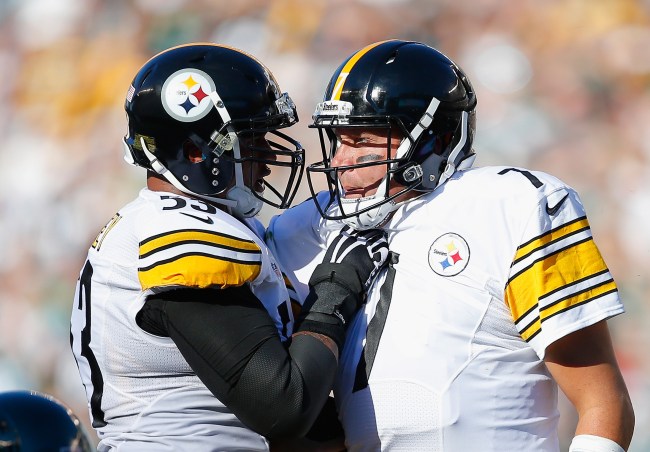 Ben Roethlisberger’s name has been dragged through the mud this offseason, from guys like Antonio Brown down to an undrafted practice squad running back who tallied a grand total of 16 rushing yards in his NFL career.

Josh Harris, who played his only NFL season with the Steelers in 2014, made bold allegations against Big Ben on Twitter, claiming that the two-time Super Bowl winning quarterback intentionally fumbled a ball at the end of a game to protest a play call. Harris used this play as a microcosm for Ben’s behavior–“At that moment I knew what kinda person he was.”

This appears to be the play that former #Steelers running back Josh Harris claims that Ben Roethlisberger intentionally fumbled on after Ben thought they should take a knee and Haley called a run play. pic.twitter.com/Vc82NHpFKo

Harris told Sports Illustrated’s MMQB that Big Ben “doesn’t try to connect with teammates” outside of the offensive line so when he blasts players publicly without having a relationship with them, it rubs them the wrong way. Isaac Redman, who played five seasons in Pittsburgh from 2009-2013, agreed with Harris’ claims about #7.

Maurkice and Mike Pouncey, on the other hand, took to Instagram to rip Harris for his inaccurate claims against Roethlisberger, chalking them up to Harris looking for clout. Not sure how Mike Pouncey can have an opinion on this seeing as he was never a Steeler, but twins sense the same shit I guess.

Josh Harris is a clown bro! Glad you put this video out to show how much of a joke that guy is! The fact anyone even gave what he said any attention shows we live in a time where people will believe anything that is said without facts!

The Pouncey twins’ comments were posted under a video that was shared by former Pittsburgh Steeler backup QB Bruce Gradkowski, a Ben Roethlisberger defender who broke down how the play went awry. No conspiracy theory in play.

Josh Harris has yet to respond at the time of me writing this.